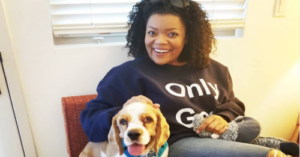 That’s exactly what happened on the set of Disney’s are remake of “Lady And The Tramp.”

All of the canine actors in the movie are rescue dogs. Producer Brigham Taylor told People it was important not only to cast real animal actors as doubles, but also for those actors to be rescues.

“Once we started turning our attention to casting the main dogs, in that same breath we said, ‘We need to rescue as many of these dogs as we can.’”

Not only did these dogs get to be big time movie stars, they also got out of shelters, many permanently.

Yvette Nicole Brown (who you might also recognize from ‘Community’ and ‘Mom’) plays one of the human roles, Aunt Sarah, a cruel babysitter with no tolerance for dogs. In real life, the opposite is true for Brown.

She told People how weird it felt to yell at the dog actors during filming.

“Sarah don’t like dogs. Yvette does. Every day on set, I had to yell at beautiful, innocent puppies, which was horrible for me as a person but I think it was hilarious.”

When she accepted the role, she didn’t expect she’d end up finishing the movie with a new family member in tow. According to Brown, the dog trainer on set did some careful, deliberate matchmaking of dogs with cast and crew members.

Brown’s obvious love for her new pup Harley is adorable. She’s even curating his own Instagram account now which is up to almost 3,000 followers.

If you’re a dog person, you were probably already planning on watching the 2019 “Lady And The Tramp” but in case you need convincing, you can watch the official film trailer below.

Clearly you really can meet the one at work!

The post Yvette Nicole Brown Just Adopted Her Canine Co-Star From The ‘Lady And The Tramp’ Remake appeared first on iHeartDogs.com.