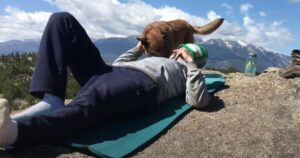 Brian Galyon, who operates the YouTube channel Off-Grid Backcountry Adventures, has spent six years traveling the American Southwest in a 4 x 4 truck. Beside him all that time was his best friend and “furry adventure partner,” a dog named Sierra.

Galyon rescued a nervous, malnourished Sierra from a shelter in early 2015 while living in the Denver, Colorado area. Early on, Galyon learned that he and Sierra have something big in common: they both love exploring the outdoors.

“We immediately started hitting area hiking trails, Sierra LOVES being out in nature running around. This is when she really started to flourish.”

Just six months after becoming family, the two set out on their new adventure. They moved into a Toyota Tacoma truck and spent their days traveling to new hiking trails across the American Southwest. Together, they’ve visited some of the most beautiful places this region has to offer.

All these two need is a truck, nature, and each other. Just look at how much Sierra seems to enjoy bounding around the great outdoors with her dad:

On a GoFundMe page created to pay for Sierra’s surgeries and recovery, a heartbroken Galyon wrote:

“I will do anything for this special girl, she literally saved my life from being a bitter person so now is my chance to try to return the favor.”

Whether it was the sweet story of devotion that moved them or they’re fans of Galyon’s YouTube channel, tons of people donated to the cause. The fundraiser has already reached $18,495, just short of its $20,000 goal.

Galyon posts consistent video updates on Sierra to his channel. She has already undergone two surgeries. Vets were able to remove most of the tumors, but the lung spots remain. Galyon says they believe those can be kept under control for a while. He also gives her CBD oil for pain.

Sierra is still on some pain medications, but she has an appetite and has been walking around outside. While she’s not quite feeling her best, Galyon plans to schedule everything around Sierra and what she’s capable of.

“While up in the mountains, my schedule will be 100% dictated by how Sierra is feeling. If she’s up for a hike then we’ll be hitting trails. If she wants to nap all day, then I’m perfectly fine with that too. It’s whatever she feels like doing…my goal is to have her life be 100% stress free so she can rest and heal.”

If you want to donate to Sierra’s surgery and healing costs, visit the GoFundMe page here. You can also visit the Off-Grid Backcountry Adventures YouTube channel to see videos of Sierra and Galyon’s past adventures.

Here’s hoping they can return to a life of outdoor exploration and adventure together soon.

The post YouTube Adventurer Raises Funds To Save His Beloved Travel ‘Pawtner’ From Cancer appeared first on iHeartDogs.com.