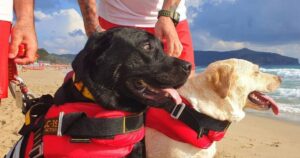 A team of impressive rescue canines saved the life of a young girl caught in a strong ocean current. Even the best of swimmers can get whisked away in an instant, leaving them to fight for their lives to stay above water. Thankfully, the dogs of SICS Italian School of Rescue Dogs were on the scene this day.

A 15-year-old named Ilenia was enjoying a day at the beach with her friends when things took a sudden turn. Their quick dip in the ocean turned into an emergency situation, as a strong riptide suddenly overcame Ilenia.

The beach in Palinuro, Cilento is known for having unpredictable currents that can pull you out to sea, which is why there is always a team of lifeguards and rescue dogs on standby. Escaping a sudden riptide takes experience and knowledge on the behavior of the currents, both of which the SICS rescue team has plenty of.

Within seconds, Ilenia was pulled from her friends and inching her way towards the belly of the sea. Her arms were growing tired from paddling, making a water rescue her only shot at surviving. The moment her struggling was made obvious, Luna and Igor jumped into action. Incredibly, this impressive rescue mission was caught on camera.

The footage begins with Luna, the tan Labrador Retriever, catching up with Ilenia alongside her handler. The two were able to pull Ilenia onto their rescue buoy, allowing her to take a break from her frantic paddling. The black Labrador Retriever named Igor soon caught up with Luna and Ilenia, and led the way in the difficult maneuver back to shore.

With Igor in the lead, the group formed a chain that helped them push through the waves and make their way back to the shore. As everyone stumbled onto the beach, it was clear just how exhausted Ilenia was from the ordeal. She immediately plopped down next to her friends, likely in shock from what she had just been through.

This rescue may have been a unique experience for Ilenia, but this is an everyday occurrence for the team at SICS Italian School of Rescue Dogs. They train dogs in all forms of operational nautical rescue, making them fit to respond to water emergencies of all kinds.

When scrolling through the canine school’s Facebook page you will see hundreds of rescue missions, skilled training of soon to be rescue pups, and the faces of those who benefit from their work. This canine academy is creating heroes, many of which will go on to save so many lives.

We are so thankful Luna and Igor were on the scene to help save Ilenia, and have no doubt they will continue to help many others!

The post Young Girl Is Saved From The Strong Ocean Current By Canine Lifeguards appeared first on iHeartDogs.com.