You Helped Dre Find A Forever Home Filled With Love 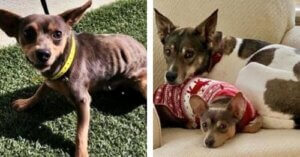 A chihuahua named Dre was rescued from her life as a stray and brought into a local shelter in Tulare, California. Though her life on the street was a battle to survive each day, she was now running out of time at the shelter. Just when it seemed like Dre was out of options, an incredible opportunity came through thanks to animal lovers like you.

Dre’s life as a stray was incredibly tough. She was skin and bones when she arrived at the shelter, likely never knowing where her next meal would come from. Though she was finally safe and offered food each day, the shelter life was extremely difficult for this timid pup. Though Dre waited patiently for her chance at a forever family, it was just wasn’t going to come in time at this crowded shelter.

With Dre quickly approaching the possibility of euthanasia, the team at the shelter reached out to the Start Rescue in hopes of transporting Dre to safety. As a result of a grant from the GreaterGood.org, funded by the iHeartDogs.com community, Dre was able to hitch a ride to Oregon for a chance at a better future!

Dre was transported from Tulare, California to an area in Oregon that is known for its high adoption rates. Her days as a homeless pup were behind her, as Dre was adopted within days of her arrival to the city.

Though it took some time for Dre to come out of her shell after a life of fear, she was finally able to become the friendly and outgoing pup she always wanted to be. Not only did Dre receive an incredible family that loves her, she even has a big fur-sister that follows her everywhere.

Dre’s fur parents say she comes up with new ways to get attention and treats each day, and never misses an opportunity to cuddle with her best furry friend. Her family has fallen in love with her quirky personality more and more each day, and they feel so blessed to have her in their life!

Happy endings like this would not be possible without the support of animal advocates like you! Thanks to your continued support and love for our furry friends, organizations like the Start Rescue will continue to offer aid to animals and shelters in need.

We are so happy for Dre and her family, and can’t wait to see the many lives that will continue to be saved in the future!

The post You Helped Dre Find A Forever Home Filled With Love appeared first on iHeartDogs.com.