Yorkie Mysteriously Dies While Under Care Of “Wag” Walker 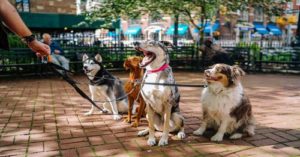 Of course pet parents can be neurotic when it comes to leaving their animals with sitters or dog walkers. Few would try to argue that point with you. But sometimes, terrible things happen to dogs under improper care or supervision that justify the everyday anxieties.

The latest horror story involves dog-walking app “Wag!”. A woman in Florida, Angela Composto, told the New York Post she used the Wag! app to hire a dog-walker for her two dogs: an 8-year-old Yorkshire Terrier named Bella and a 3-year-old Cavalier King Charles Spaniel named Chloe. In no way would she ever have predicted this routine job would result in Bella’s death.

“I couldn’t understand how a little dog goes out on a walk and comes back dead.”

The worst part for Composto is not having any answers. Her home surveillance video showed the walker, named Hannah, picking up the dogs around 7:30am. She returned at 8:18am walking Chloe but carrying Bella in her arms.

Wag! walkers are required to send updates after walking dogs, which Hannah did. She sent a photo of both dogs looking happy with a note that the walk went “great.” She added that Bella “took a fall,” but promised to stay back and make sure she was alright. The security camera shows her leaving at 8:24am. Just before that, she can be seen pacing around the driveway talking on her phone.

When Composto reported what she saw and heard to Wag!, they told her they would send another dog-walker to check on Bella. Just under 2 hours later, that second dog-walker found Bella dead in her crate.

“I wanted to scream, and I burst out crying. I couldn’t even breathe. I can’t get it out of my mind that [Hannah] possibly could’ve saved [Bella] … and I’ll never know if Bella was alive and just needed to get to a vet … or if she was already dead.”

Further medical inspection found that Bella had suffered trauma to the left side of her skull and her leg, but her cause of death was still uncertain. As of now, there’s no way of knowing what actually happened on Bella and Chloe’s routine walk. But Composto’s devastation is completely reasonable.

Apparently, this is the 15th dog that has either been lost or killed while with a Wag! walker since 2015 according to data collected by The New York Post. Yikes.

“It’s a no-brainer why so many precious dogs are killed, abused and stolen under Wag’s watch, and why consumers deserve the attention of their attorneys general and legislators to create laws mandating training, licensing and bonding of dog walkers,” she added.

I think it’s fair to say it’s time to see some accountability from the app.

The post Yorkie Mysteriously Dies While Under Care Of “Wag” Walker appeared first on iHeartDogs.com.