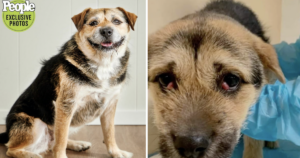 When Jackie Rakers saw a 5-month-old puppy looking for a foster home, it was love at first sight. But the pup needed eye surgery, and the vet who operated on her decided to adopt her. Rakers was heartbroken, but then a month later, the vet returned the scared puppy, so it seemed like it was meant to be. Soon after, Rakers adopted the shy little dog and named her Heaven!

Now, Heaven is no longer the terrified puppy at the shelter. She’s famous for being the 2021 People‘s World’s Cutest Rescue Dog. She beat over 10,000 applicants, including these other adorable finalists!

Heaven was once a stray in Kentucky who ended up at an overcrowded shelter. Then, she was transported to Starfish Animal Rescue in Illinois, which is where Rakers first spotted her. At the time, Heaven was anxious and afraid of everything. She cowered in the corner of her crate at the shelter, but Rakers still took a chance on her.

“I was like, ‘Oh my gosh, I love this dog,’” said Rakers. “She was where she was meant to be. And we’ve been together ever since.”

As a puppy, Heaven’s biggest fears were men and the outdoors. So, Rakers took her to lots of dog-friendly places to help her overcome those frights. She rewarded Heaven for facing her fears, and eventually, the little dog grew into a social butterfly.

“Anytime a cart came past and made noise, or a man walked past, she learned that if she made eye contact with me instead of reacting, she got a treat,” said Rakers. “We worked through a lot of fears together.”

Today, everyone knows Heaven for her beautiful smile. She has come such a long way since Rakers adopted her, and her story has inspired many dog lovers to adopt. Heaven is currently about three years old and 38 pounds. She’s a mix between a Chow Chow, Labrador, Boxer, and Pekingese.

Heaven’s happy face helped her earn the title of People‘s World’s Cutest Rescue Dog in 2021. Last year, a puppy mill survivor named Lamb Chop won. This contest is so important because it shows the world how awesome rescue dogs can be, and it encourages more people to adopt dogs in need, especially those who are often overlooked.

Along with a feature in People Magazine, Heaven also received a year’s supply of Pedigree dog food, a photoshoot, and a $1,000 donation to the rescue of her choice. She is donating the dog food to Kentucky River Regional Animal Shelter, which is a shelter that Starfish Animal Rescue gets dogs from. The $1,000 is going to K9s For Veterans.

“I feel like the biggest thing that I learned from her was just not to give up,” Rakers said. “Heaven went through a lot really early in her life. Things that no dogs should have to go through. But she still loves life.”

Rakers hopes that Heaven’s journey inspires people all over the world. Hopefully, it will also encourage more people to take a chance on a shy, anxious rescue dog. After all, the bond between a human and their rescue dog is one of the most heartwarming things in the world.