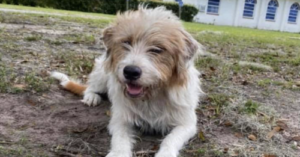 Chance, Zeus, and Lily were all stray dogs that were found near a church in Hillsborough County, Florida. When Carley Coca saw a post about them online, she knew she had to help right away. Coca loves dogs, and she even volunteers at the Paw Print Hearts rescue. So, she rushed to the scene right away to see what she could do for these poor dogs. They appeared as if someone had just left them there.

When Coca arrived at the church, she had no problem getting Zeus and Lily to climb into her car. However, Chance refused to follow. He didn’t even want to come near Coca or the car.

Coca tried to calmly approach Chance, but he just barked and eventually ran away. It broke her heart to see him go, but she could tell that he was too scared to trust a human. So, she brought Zeus and Lily to safety, and she promised Chance she would return.

The next day, Coca returned to find Chance in the same area as before. Just like their first encounter, the scared pup wanted nothing to do with her. She had expected this, so she came prepared. She brought some burgers for the dog and began throwing them toward him, hoping to gain his trust.

Chance gladly ate the snacks she brought, but he still didn’t want to come near her. So, Coca returned to the same spot with snacks for him every day. She tried all kinds of different things to gain his attention, but he still seemed terrified. She even tried bringing Lily with her one day to see if he would trust her, but poor Chance just didn’t want Coca’s help.

On the 6th day, something different happened though. When she arrived at her usual spot, Coca found Chance waiting for her. Usually, he would be hiding far away from her, but this time, he was at the end of the driveway, awaiting her arrival.

That day, Chance gladly accepted the food, but he still didn’t want Coca to touch him. She knew she was finally making progress with him though.

When she arrived on the 8th day, Chance actually came running to the car. She stuck her hand out the window, and to her surprise, he licked her! His tail was even wagging, so Coca knew she had finally gained his trust.

Chance finally let Coca pet him, and she couldn’t help but cry happy tears. She was finally able to pick him up and bring him into her car.

When Coca took chance with her, she noticed that he was covered in fleas, ticks, and burrs. He clearly had a lot of healing to do. Zeus and Lily had been taken to foster homes, but Coca didn’t think that was the right path for Chance. So, she decided to foster him herself.

So far, Chance has settled into his temporary home very well. He’s been getting along with Coca’s dogs, and he seems very comfortable around her now. Coca worries that he might have a hard time meeting new people though.

Chance will stay at Coca’s home for 3 months since legally, Coca has to see if he already has a family. After those 90 days are up, Chance will be up for adoption and Coca will help him find his forever family. She hopes that in the meantime, his time with her will help him to feel more comfortable around people.

The post Woman Visits Scared Dog Every Day Until He Learns to Trust Her appeared first on iHeartDogs.com.