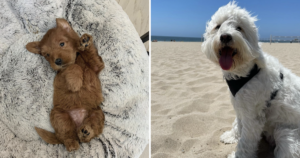 A woman was ecstatic when her family surprised her with an adorable puppy named Porter for her birthday. The pup was said to be a red-brown male Maltipoo with all the necessary vaccinations. However, the woman quickly realized that something wasn’t right.

After the puppy arrived home, the breeder stopped responding to texts and calls. Then, Porter’s mom soon realized that the breeder had spread many lies about the puppy. The most shocking was that the puppy was actually a girl, and her fur wasn’t supposed to be brown! If the woman could’ve done it over again, she would’ve adopted a rescue dog instead.

Right away, the woman had her suspicions about where Porter came from. The pup was supposed to be eight weeks old but seemed very skinny and sleepy for her age. Also, the breeder never sent Porter’s mom the vaccination records as promised. So, she took her to the vet right away.

The vet determined that Porter is a girl, despite the breeder’s claims. They also noted that Porter isn’t a Maltese/Poodle mix, and she had never been vaccinated. She was likely only 4 to 5 weeks old at the time, which is too young for a breeder to sell a puppy.

After doing more research, Porter’s mom discovered how common puppy scams are. Inhumane breeders will often sell sick pups and lie about their breed and age. Some will even dye their coats to make them more appealing. As Porter aged, her mom realized that her hair had likely been dyed too.

While it’s common for puppies to have different colored hair as their puppy coats grow out, Porter’s situation was very extreme. She was a dark red-brown color as a puppy, but as she started getting bigger, patches of the brown quickly turned white, especially around her face.

Now that Porter is full-grown, she has a completely white coat. Plus, she is much bigger than a Maltipoo is supposed to be, but her mom still loves her despite it all. She has learned her lesson and will be more careful where she gets her dogs from now on.

“If I had a choice, I would definitely adopt,” she said.

You can’t change the past, so all Porter’s mom can do for now is love her dog and warn others. She reminds other families that they should meet the breeder and the dogs in their care before buying a puppy. It’s also important to never buy a puppy through an online breeder or pet store. Of course, adopting from a shelter or rescue is the best way to go.

It’s horrible that some breeders lie for extra profit, but Porter is so lucky that she’s healthy and living with a loving human. Not all puppies in her situation are as fortunate.