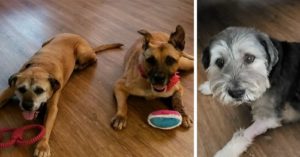 Leslie Sacks loves “helping out the needs of the lost and helpless.” That’s how she ended up sharing her home and property with five senior dogs, three goats, two Chilean squirrels (Dagos), two flying squirrels (Sugar Gliders), and a handful of cats. All of which are rescues.

Sacks’ heart of gold made headlines after a July 24 visit to the Asheville Humane Society in North Carolina.

“Which two dogs have been here the longest, with the most special needs?” she asked. “I’m here to take them both home with me.”

The staff knew just which dogs to recommend.

Sam is a fun-loving senior gal surrendered to AHS back in December when her previous owner became seriously ill. In addition to her advanced age, Sam has a few health problems of her own including a thyroid problem and a skin condition.

She takes daily medication and requires a special diet, making it difficult for her to find the right adopter.

13-year-old Brutus’ family surrendered him to the shelter in March, asking that he be put to sleep. Veterinarians determined that euthanasia was unnecessary. Brutus may be old, but he still has plenty of spunk.

He was placed with several foster families, but always ended up back at the shelter due to his health problems and severe separation anxiety.

Sacks immediately agreed to adopt both dogs! The following video shows Sam and Brutus awaiting their freedom ride to their new forever home as tearful staff and volunteers look on.

“As she walked them to the car, Leslie talked softly to these two sweet souls, with their creaky joints and grey muzzles, who have been through so much hardship,” Meredith Pitcairn, AHS’s communications and digital fundraising manager, writes in the now-viral Facebook post. “She told both Sam and Brutus that they now had a family to love them for the rest of their days. And Leslie assured Brutus especially, who panics when left behind, that he would never spend another moment alone ever again.”

Sacks has lived in California, Florida, New York, and now North Carolina. Throughout her life, she estimates she has adopted between 40 and 50 senior dogs as well as other animals in need.

“She told us that several years ago, she went to another shelter and adopted their five hardest-to-adopt dogs, all at once,” said Heather Hayes, the shelter’s marketing manager. “So she kind of adopts them in groups and then recently she said she lost seven of her senior animals. They’re not with her for very long, but they have a wonderful life while they are with her. She decided that she could open her home again to two animals that need a second chance.”

Samantha has not always gotten along with other dogs, but she and Brutus bonded right from the start.

“I was told they were kept separate, and may not get along, etc.  Their “adjustment” began as soon as they went into my car, side by side.  They now follow me, and each other, like little pups!”

In the video, Sacks mentions two more senior dogs she has her eye on at the shelter. Just one week after rescuing Sam and Brutus, she returned for one of those pups! On Aug. 2, Lily, a 13-year-old Schnauzer mix joined the pack.

“She [Lily] arrived to the center matted, and in need of surgery,” Sacks told iHeartDogs. “You should see her now: 13-plus years young and “Red Carpet” ready!”

“Most people want ‘cute’ pups or kittens, which is fine.  The objective is to find a home for everyone,” Sacks said. “The elderly and infirm are typically overlooked. However, [they] deserve to live their remaining days in comfortable, loving surroundings, treated with dignity – whatever their history – and know that they are loved.”
“My definition of a successful person is one who makes a difference in the life of another…the ‘other’ can certainly be of the furry variety!”