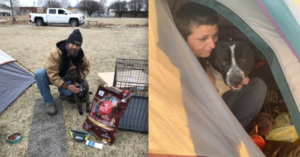 Most loyal dog parents would do anything to keep their furry friends happy and healthy. Unfortunately, not everyone can support their dogs as much as they want. There are many people out there that are left homeless because they can’t find a shelter or cheap apartment that will accept their dog. Many dog parents are so loyal that they would rather live in a tent than have to give up their best friend.

Imgur user tayrclark, whose real name is Taylor, knows precisely how vital caring for a dog is. She has rescued, adopted, and fostered so many dogs throughout her life. Now, she’s working hard to help the dog parents that aren’t quite as fortunate.

Taylor’s love for helping dogs in need first started when she met a puppy named Buster. She had adopted and fostered quite a few dogs in the past, but this was different. He was a poor puppy that was hairless due to mange, a skin disease caused by parasitic mites.

When Taylor saw Buster, she fell in love. He was running out of time at the shelter, so she knew she had to do something. She already had three dogs of her own to care for, but she didn’t want to see anything bad happen to poor Buster. So, she fostered him!

Under Taylor’s care, Buster made an amazing transformation! He slowly recovered and grew his fur back, even becoming more playful and loving as time went on. Thanks to the Buster updates she posted on Imgur, he found his forever home after he had fully healed!

While Taylor was sad to part ways with Buster, she knew she had to continue to help other dogs in need. Since then, she has continuously fostered dogs, especially the ones that needed immediate help like Buster.

“Our Oklahoma City animal welfare isn’t funded enough to treat sick pets that cost less to euthanize,” explained Taylor. “We don’t have a homeless shelter that allows pets overnight resulting in multiple tent communities of dedicated pet owners who won’t allow their hardships to compromise their relationship with their 4-legged friends.”

Now, Taylor has taken her generosity beyond just fostering dogs. She has extended her heart to families in need. Specifically, she has been helping homeless families in her area care for their dogs.

Taylor discovered that there are lots of homeless people near her living in tents. They couldn’t find a homeless shelter that would accept their dogs, so they did what they knew was right. They all remained loyal to their dogs despite having nothing.

Throughout all her adventures, Taylor has received lots of generous donations from Imgur users to help her care for her foster dogs. So, she has asked the community if they would donate some items to these homeless families and their dogs.

Taylor received lots of fabulous donations such as dog food, bowls, treats, collars, leashes, and even crates! She gave these items to all the homeless dog parents in the tent community. She also asked them if there was anything else they needed for their dogs. If they ever have something specific in mind, Taylor adds it to her Amazon wishlist. She’s determined to help these families in any way possible.

While visiting these communities, Taylor even ended up taking in an interesting group of foster dogs. She came across eight puppies that were living in a suitcase. The kind woman that was caring for them asked if Taylor could foster them and find them good homes. The woman asked for nothing in return. She just wanted to make sure the puppies were safe.

So, Taylor took in all eight puppies. She’s currently working hard to keep them all happy and healthy. In the meantime, she’ll keep giving them the love they deserve until they find their forever families. And she’ll never stop helping the homeless community care for their dogs.

If you’d like to donate items to help these families in need, please check out Taylor’s Amazon wishlist and Target wishlist. Even small items could make a huge difference for one of these dogs.

Also, please check out Taylor’s Imgur account to stay updated on all the dogs that she’s helped. The world deserves more kind dog lovers like her!