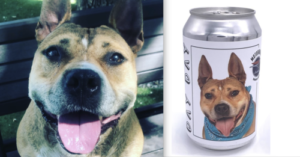 3 years ago, Monica Mathis from Iowa lost her beloved pup named Hazel. Hazel was known for being an escape artist, but this time, it got out of hand. Mathis left Hazel on a leash in her yard to go to the bathroom, and she quickly vanished. The pup was nowhere to be found. Mathis began to lose hope in finding her furry friend. But to her surprise, she was soon reunited with her dog in the most unusual way possible.

Since then, Mathis and her children moved to Minnesota. It seemed like Hazel was out of their lives forever. However, when Mathis saw a Florida brewery promotion, everything changed.

In a promotion for Motorworks Brewing, special beer cans featured adoptable dogs in the area. On one of the cans, Mathis spotted a happy face that was very familiar. She looked closely at the photo of “DayDay” from Manatee County Animal Services, and she quickly realized that it was Hazel!

“I was looking at the dogs and I was like ‘oh my gosh, that’s Hazel!’” said Mathis. “I have no idea how she got to Florida.”

Right away, Mathis contacted the shelter about Hazel. Of course, they needed proof that Hazel was really her dog, so Mathis sent them any proof she could find. She sent over photo after photo until the shelter was able to confirm that “DayDay” really was the dog she lost.

The shelter explained that Hazel arrived as a stray a few months ago. They found that Hazel had a microchip and a license, but neither were updated with Mathis’ current information. Therefore, they had no way to reunite her with her family. So, they put her up for adoption.

The photos for the beer cans were chosen randomly. They selected a few of the dogs that had been at the shelter the longest. Everyone involved is now thrilled that Hazel was selected because otherwise, she might’ve never found her way home!

No one is sure exactly how Hazel made the long journey from Iowa to Florida. However, this story has warmed the hearts of people all over the world. Hazel has not made it home yet, but she is set to arrive in time for her 7th birthday.

Friends of Manatee County Animal Services, an organization that raises money for the shelter animals, has kindly agreed to help bring Hazel home. They will cover the cost of transporting to make sure Hazel is safe and sound during her trip.

“I was amazed, I was crying. An emotional wreck,” said Mathis.

Manatee County Animal Services is using this heartfelt story to remind dog parents to get their dogs microchipped. Also, to update those chips if contact information changes.

Mathis was lucky that she saw Hazel’s photo online. Otherwise, it’s likely that they never would’ve found each other again. Hazel returning home really is a dream come true, so let’s wish her a safe trip to Minnesota!

The post Woman Finds Long Lost Dog After Seeing Her Photo On A Beer Can appeared first on iHeartDogs.com.