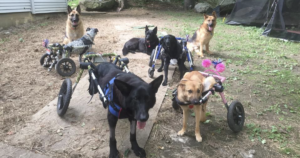 Sadly, special needs dogs are often the hardest dogs to find homes for. Many dog lovers are worried that these dogs will cost them too much time and money. However, Tracy Fowler knows first-hand that caring for special needs dogs is such an exciting and rewarding experience.

After her German Shepherd named Hayden passed away, Fowler felt a strong urge to help more dogs in need. So, she started adopting disabled dogs in his honor. Before she knew it, she had nine dogs living in her house at once!

For a while, Fowler only had three German Shepherds to care for. Amigo and George were healthy dogs, but Hayden fought multiple health problems. She had him since he was a puppy, but when he was about 8 years old, he became paralyzed due to degenerative myelopathy. The vets told Fowler that getting him a cart would probably be too much work, but Fowler refused to give up on her dog.

So, as soon as Fowler got home from the vet, she contacted HandicappedPets.com. They were able to quickly get him a wheelchair so he could still move on his own. When Fowler put the wheelchair on him, she said he began running and playing right away. It was like his wheels were a part of him.

Caring for a special needs dog was a learning experience, but Fowler eventually got the hang of it. In fact, she enjoyed it because she knew she had helped Hayden live his life to the fullest. So, when the time came to say goodbye to Hayden, she was devastated.

However, losing Hayden also inspired Fowler. She still had Amigo and George by her side, but she knew there were other dogs out there that needed her help. So, she began adopting special needs dogs to help give them a second chance at life. Some of the dogs only survived for a short amount of time, but she still felt honored to have cared for them.

“When I first started, it was easy, but as you go on, you realize that it’s not for everybody. But the lives that you can save makes you a better person,” said Fowler.

At the moment, it looks like Fowler has nine dogs. Two of them are the German Shepherds she had before Hayden passed, and the other seven are special needs rescues: Smurfette, Lacey, Hope, Merida, Heath, Nordic, and Otis. She calls them “The Fowler Herd”.

That many dogs can be a lot to handle, but Fowler works hard to make sure they all get equal love and playtime. The dogs all enjoy going on walks together, but it can be a bit chaotic at times. When it snows outside, Fowler even has skis that she can replace their wheels with.

Not only is Fowler making life better for her and the dogs, but she also hopes she can inspire others too. A lot of people overlook old dogs and disabled dogs at shelters and rescues, but they’re just as loving as any other dog. Fowler’s dogs are all so happy and active that she often forgets they have special needs.

“If we are able to show one [person] there is another option besides saying goodbye to their sick pet, then that’s what our goal is,” said Fowler.

Fowler even made an adorable Facebook page for her herd of pups. She frequently posts photos and videos of the dogs’ exciting lives, and followers have quickly gotten to know each and every dog. Follow “The Fowler Herd” to see more adorable updates on Fowler’s exciting life with her rescue dogs.