What Is Idiopathic Immune-Mediated Thrombocytopenia (IMT) in Dogs?

“Idiot what?” Based on the current situation, I could understand the pet owner’s frustration and worry. On my exam table lay his nearly lifeless dog, Chloe. Chloe had recently celebrated her sixth birthday and, 48 hours ago, was a perfectly healthy Cocker Spaniel. When I saw her, she could barely raise her head. “Idiopathic immune-mediated thrombocytopenia. That’s a fancy term for ‘We aren’t sure of the exact cause’ of the bleeding caused by platelet destruction.”

“Sounds like ‘idiot’ to me, then. Can’t you run a test to find out if she’s been poisoned or something? Look at her — she’s dying!”

What is Idiopathic Immune-Mediated Thrombocytopenia or IMT in dogs? 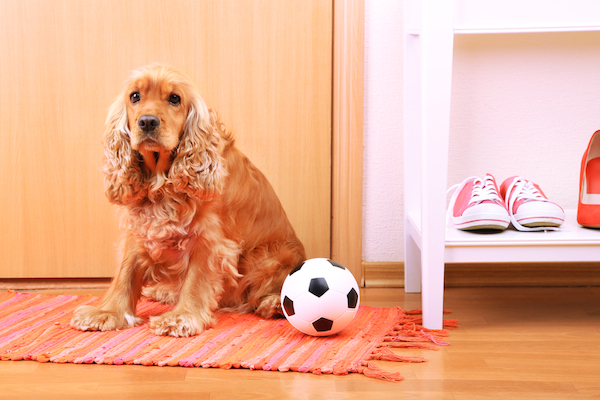 Female, middle-aged Cocker Spaniels are among the dogs most likely to get IMT. Photography by Africa Studio / Shutterstock.

My primary concern was that Chloe was suffering from a somewhat rare, but life-threatening, condition known as idiopathic immune-mediated thrombocytopenia (IMT or ITP). There were several clues that led me to this working hypothesis:

“Mr. Kitchens, I’m afraid you’re right. If Chloe has thrombocytopenia, it can be fatal. My job right now is to rule out other diseases that can mimic IMT, such as tick-borne diseases, poison, cancer, a ruptured spleen, or other infections or conditions. At the same time, we’re going to measure her red and white blood cells and platelets to get a better idea of how advanced her blood and platelet loss may be. Let’s get started with these tests, and I want to make her more comfortable. I should have some answers for you over the next two to three hours.”

What are the symptoms of Idiopathic Immune-Mediated Thrombocytopenia or IMT in dogs?

IMT causes destruction of platelets, the cells that stop bleeding by plugging up tiny tears in blood vessels. If the blood can’t clot, nearly any jolt or bump can lead to internal bleeding and bruising. What makes IMT even scarier is the fact that, for some unknown reason, the body’s immune system begins targeting and destroying platelets. In some dogs, the hemorrhaging can become so severe that nosebleeds (epistaxis), bloody urine (hematuria) and feces (hematochezia), and bleeding gums occur. Many dogs, including Chloe, develop purple patches and splotches, indicating bleeding beneath the skin. It was time to diagnose my critical Cocker Spaniel.

While I awaited Chloe’s blood and urine tests, I evaluated her X-rays. I wanted to carefully look for any signs of tumors in her chest or abdomen. Fortunately, everything was normal with the exception of a moderately enlarged spleen. The spleen acts as a blood filter of sorts, removing damaged red blood cells and platelets. The spleen also makes the antibodies that attack platelets in IMT, leading to removal of the spleen (splenectomy) in certain cases, especially those that fail to respond to medical treatments.

As I finished examining Chloe’s X-rays, the other test results were ready. As expected, her red blood cell and platelet counts were dangerously low (anemia and thrombocytopenia). Heartworm, Lyme disease, Ehrlichia and Anaplasma tests were normal, ruling out tick-borne disease as Chloe’s culprit. I also ordered a blood test to determine if Chloe was able to make new red blood cells quickly.

Fortunately, her reticulocyte count was elevated, indicating her body was pumping immature red blood cells into circulation in an attempt to counter blood loss. This is important, because some dogs may also have a disease known as immune-mediated hemolytic anemia (IMHA), that destroys red blood cells. If I could stop Chloe’s body from attacking her platelets, she could survive.

How is Idiopathic Immune-Mediated Thrombocytopenia or IMT in dogs treated?

Chloe’s owner had brought her in quickly, and her anemia, while serious, wasn’t life-threatening. That meant we could delay blood transfusion at least for 24 to 36 hours. While it seems logical to transfuse any patient with IMT, the reality is that blood transfusions don’t significantly raise platelet counts, and the new platelets might be destroyed as quickly as you replace them.

The key is to stabilize patients such as Chloe as quickly as possible and reverse the immune system attacks. For that, I turned to an old pharmaceutical pal, prednisone. Prednisone is one of the oldest, most common and widely studied immunosuppressive drugs in medicine. It is still the first choice for the majority of patients suffering from IMT. Most dogs will show significantly increased platelet counts within a week.

If prednisone isn’t helping or side effects become worrisome, I’ll often add azathioprine or cyclosporine. Newer treatments such as organ transplant medication mycophenolate mofetil and leflunomide for rheumatoid arthritis may also be used in severe cases. Splenectomy is also an option for cases that are unresponsive to medications. By the next morning, Chloe’s condition was improving. Within 48 hours, she was able to go home under careful observation.

When we checked her blood tests one week later, she had rebounded miraculously. Chloe would need to remain on prednisone for four to six months and have her blood tests monitored regularly for life, but she would survive. I also added the nutritional supplement melatonin based on human studies and my personal experiences with IMT.

Chloe’s case illustrates the importance of early medical intervention. If her owner had waited another day, or even half a day, to seek help, it could’ve been too late. If your dog becomes suddenly “tired,” doesn’t eat for 48 hours, or you feel “something’s just not right,” don’t delay. You’ll never be wrong in making sure your beloved pet is safe and healthy.

Dr. Ernie Ward is an internationally recognized veterinarian known for his innovations in general small-animal practice, long-term medication monitoring, special needs of senior dogs and cats and pet obesity. He has authored three books and has been a frequent guest on numerous TV programs.

The post What Is Idiopathic Immune-Mediated Thrombocytopenia (IMT) in Dogs? appeared first on Dogster.