What Do You Think Of The Leaked Photos Of The Live-Action Clifford The Big Red Dog? 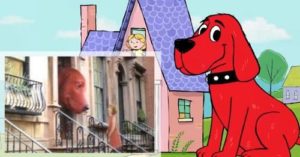 The giant dog named Clifford is hitting the big screen in a live-action remake of the beloved TV show. With the beautiful story that Clifford The Big Red Dog portrays, we are counting down the days until this  film is finally released.

Clifford the Big Red Dog live-action is a heartwarming comedy based on Norman Birdwell’s popular book series. The movie is directed by Walt Becker starring Darby Camp and a realistic depiction of the big red dog named Clifford. This film is said to revolve around Emily, Emily and Clifford’s endeavors, and the challenges that come along with having a dog the size of a house.

Emily Elizabeth and her big red dog named Clifford have a history of going on wonderful adventures together. Though Emily was shocked by the daunting size that her once tiny puppy grew into, she stuck by her pups side no matter what! Clifford The Big Red Dog can spread a message to children on the serious commitments we make to our pets once we welcome them into our family.

“There is something enduring in Clifford’s gentle, loyal spirit that touches fans even after they become adults. We see it in tributes on social media and in fan art, and of course, in every parent who grew up with Clifford and now shares their love of him with their preschoolers.” – Executive Producer Lole Lucches

Though we all have a soft spot for Clifford, some fans are a bit freaked out by the leaked photos of the live-action film that have made their way around twitter. It’s time to toss out any of the preconceived ideas you have in your mind about what the live-action Clifford will look like, because the leaked photo is pretty crazy.

Hmmmm… not terrified at all lol #Clifford Movie pic.twitter.com/nMahAdhkLH

The leaked photo shows a very large Clifford peeking out of what appears to be a brownstone apartment.  Emily is standing on the doorstep, in awe of her over sized friend! Though Clifford is sporting a sweet smile, the internet has mixed opinions on how they feel about the photo.

Some fans are comparing Clifford to the ominous lurking of a Jurassic park dinosaur, while others are just plain terrified. Though the critics are coming out of the woodwork, we have no doubt that the live-action Clifford film will be a hit regardless.

We can’t wait to watch Clifford’s big red paws strut through his upcoming adventures with his favorite sidekick, Emily. What do you think about the leaked photos?

The post What Do You Think Of The Leaked Photos Of The Live-Action Clifford The Big Red Dog? appeared first on iHeartDogs.com.