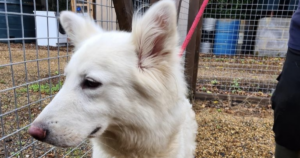 Teresa Saade and her family planned for their Swiss Shepherd named Lessy to fly from Lebanon to Bolton, United Kingdom. Everything seemed to go smoothly until a miscommunication ruined everything. A typo in Lessy’s vet records made her unable to go home to her family. Now, if the family can’t pay to have Lessy quarantined for a few months, the innocent pup might be put to sleep.

Saade refuses to let that happen, so she has started fundraising to save her furry friend’s life. But she still has a long way to go until she meets her goal.

Lessy was Saade’s partner’s dog in Lebanon. Saade’s family spent over £2,000 ($2,767.43) to bring the pup home with them. But at the Heathrow Airport, Lessy ran into unexpected complications.

A vet in Lebanon wrote down the wrong dates for the pup’s blood tests and vaccinations. Thus, officials couldn’t allow her to fly to Bolton, and they had to hold her on a three-month quarantine to adhere to animal transportation laws.

“All went well but after arriving in the UK, Lessy’s paperwork was checked and the vet who filed her paperwork to prove her rabies vaccine and blood work has put the wrong date on the documents, making them null and void,” Saade wrote on a GoFundMe page. “Now our beautiful girl is stuck at the airport faced with being put to sleep if we can’t raise the funds to keep her in quarantine for three months.”

The four-year-old pup has no choice but to wait in quarantine until October. Saade is willing to be patient, but now she fears that she won’t be able to afford to hold Lessy for that long. If she can’t pay the fees, she claims the dog could be put to sleep.

Saade is on Universal Credit because she is unable to work. The family has tried everything to bring their dog back sooner, but it’s not possible. Even after saving every penny they could, they still won’t have enough money for Lessy’s fees. Seeing their beloved dog euthanized for something preventable is one of the worst fates they can imagine.

“We’re absolutely desperate for help. The thought of losing her is breaking our hearts – as a family we need to get Lessy home safe,” said Saade. “She’s a beautiful, friendly, healthy girl whose future we are now unsure of. Any help would be so appreciated by our family.”

So, Saade started a GoFundMe campaign to raise money, but it hasn’t gotten much attention yet. She set a goal of £3,200 ($4,426.13) to guarantee Lessy’s safety. If you’d like to help save this Swiss Shepherd’s life, please consider donating to the GoFundMe.

The post Vet’s Mistake Has Dog Stuck At UK Airport & At Risk Of Euthanasia appeared first on iHeartDogs.com.