Veteran Who Lost His Leg Adopts A Three-Legged German Shepherd 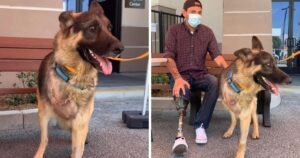 Dane Orozco found a forever friend in a pup with a similar struggle. After fighting the depression that came along with losing his leg, he knew he needed the companionship that only a dog could offer.

Dane is a military veteran that has worked through the trauma of his devastating injury. He lost his leg just over 4 years ago, but still battles the crippling depression that comes along with something so traumatic.

Dane’s boss noticed that he was struggling more than usual and asked him if there was anything that used to make him happy before his trauma. That’s when Dane thought of his love for dogs and knew he needed to take that next step to happiness.

Dane took a trip down to the Inland Valley Humane Society in Pomona to take a look around and see if this was something he truly wanted to commit to. He soon locked eyes with a unique furry friend and knew his life would be forever changed.

“I have to take him. This is the dog that I’m going to take home today.” – Dane Orozco

Dane was introduced to a young German Shepherd that was brought into the shelter after being hit by a car. His leg was shattered from the impact and was unable to be repaired with a cast. The shelter made the decision to amputate his right leg, the same leg that Dane lost.

“The fact that he had an amputated leg like I do really drew me to him. I just thought, we have something in common, and I could help him through his pain and discomfort, knowing exactly what he’s going through.” – Dane Orozco

The vet at the shelter described just how strong the German Shepherd was in the wake of losing his leg. He was up and walking within 24 hours of his procedure, proving just how tough of a pup he is. Just like his soon-to-be dad, he’s a fighter!

Dane eagerly signed the adoption papers and set off to begin his future with his new furry friend. The shelter captured a video of the special moment Dane walked out of the shelter with the Shepherd, which ended up getting over 12 million views on TikTok.

After lovingly naming his new pup Kane, the two quickly settled into their new lives together. Kane is his dad’s shadow, even coming to work with him each day and sitting at his side.

We can’t think of a better outcome for both Dane and Kane on their road to recovery. These two share something special, and we are so glad they found each other!

The post Veteran Who Lost His Leg Adopts A Three-Legged German Shepherd appeared first on iHeartDogs.com.