Veteran and Loyal Dog Live and Die Together 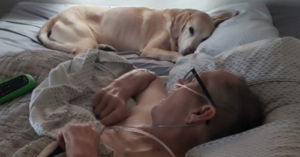 We have all heard stories about couples who are so closely bonded that when one passes away, the other shortly follows. “Dying of a broken heart” happens with dogs and human companions, too. In this beautiful story of devotion and loyalty, we realize the connectedness between those who love each other, in life and in death.

A Life of Service

Daniel Hove spent his entire life in the service of others. He served for many years in the Air Force. After retiring from the military he became a firefighter. He eventually served as the community fire department’s chief.

A Devastating Diagnosis and a Loyal Dog

Hove’s cancer progressed despite chemotherapy treatments. Gunner slept in a bed right next to Hove. Gunner’s health declined in line with Hove’s health. It seemed that the two were connected on a cosmic level. Hove’s daughter Heather Nicoletti told KARE11 News, “Gunner could not be without my dad. I think he chose to go with him.”

Best Friends Until the End

Dying is a process very unlike what is portrayed in movies and television. Typically, a person declines over the course of weeks or months. Eventually, most people become unresponsive in the last days or hours of life. They are still breathing and alive but are unable to speak or respond. Hove and Gunner entered this unresponsive stage together. “My dad was unresponsive, the dog was unresponsive. So once we saw how the dog was doing–he wasn’t moving much anymore, not doing well– we knew, it was coming,” Nicoletti told KARE11 News.

Nicoletti made the difficult decision to help Gunner peacefully pass at the vet office where she once worked. She returned home to join her father at his side. Hove died just an hour and a half later. Nicoletti said, “I called the vet clinic I used to work at, they got me in right away and I rushed him up there, put him to sleep. And about an hour and a half later, my dad was gone too.”

Our hearts go out to the family as they grieve both the loss of a father and a four-legged family member. Their bond is a shining example of the power of love between beings of all kinds.

The post Veteran and Loyal Dog Live and Die Together appeared first on iHeartDogs.com.