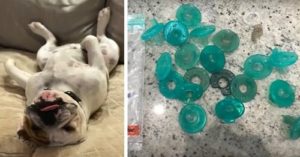 It’s not uncommon for the family dog to feel jealous when a new baby invades their turf. But a Massachusetts pooch named Mortimer took his baby blues to a whole new level.

Mort’s humans brought him to the vet after the 3-year-old pooch began vomiting and refusing meals. An X-ray revealed the source of his tummy troubles: 19 baby pacifiers!

Luckily for Mortimer, Dr. Doug Brum at Angell Animal Medical Center was able to remove the pacifiers using an endoscope – a flexible tube with a light and camera attached.

“It’s likely that Mortimer started nabbing these pacifiers in April, perhaps one at a time, and that started a cycle of nausea and vomiting, which are symptoms that can be caused by so many other health issues,” Brum said. “If not for the urgency with which his family pursued veterinary care, things would have gotten much worse for him.”

Cases like Mortimer’s showcase the dangers of foreign bodies in pets. When dogs and cats ingest non-food items, the material can become stuck at any point along the digestive tract. The resulting blockage is often life-threatening.

Just about any material can cause a blockage – paper, fabric, drywall and carpet are common culprits. As are natural materials like sticks, rocks and leaves.

Dogs also love items that smell like their favorite humans, hence their propensity for stealing socks, underwear, pantyhose, and other personal items. Traces of saliva on pacifiers, toothbrushes, and mouth guards are what attract dogs like Mort.

Shockingly, many owners have no idea their pooch is eating non-food items.

“Even though I have two small children at home, I’d never imagined he was eating their pacifiers,” Mortimer’s mom said. “We absolutely love this dog and would do anything for him.”

If you suspect your dog of ingesting foreign material, monitor them closely for signs of blockage including:

When in doubt, head to the vet! A simple X-ray can help determine if your dog needs life-saving surgery.