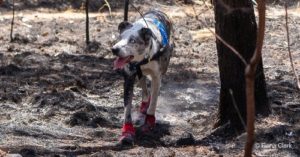 Last month, iHeartDogs.com published a story about a surrendered dog with OCD who went on to train as a detection dog in Australia. Bear’s unique skills helped save koalas whose habitats were devastated by wildfires. Before Thanksgiving, the hero pup got even more attention thanks to beloved Oscar-winning actor Tom Hanks.

As promotion for his new Mister Rogers biopic “A Beautiful Day In The Neighborhood,” Tom Hanks sat down with Twitter Movies to read some of the nicest tweets of the day. That batch of heartwarming short blurbs included Bear’s story. Hanks loved it, obviously.

“This is a Disney movie. That must be made. The story of Bear: the koala detection dog. That’s adorable. I like Bear.”

This is such a wholesome occurrence I have wholesome overload right now! Let’s hope Disney is listening too.

Bear is one of those super-dogs saving animal lives with his sniffing skill. The Border Collie/Koolie mix uses his powerful nose to rescue koalas threatened by devastating fires in Australia.

Braving Threatening Conditions To Save Koalas

Dangerous bushfires have been raging throughout New South Wales. While this has been harmful to many, it’s especially devastating for the local koala populations.

As a detection dog, Bear is trained to locate live koalas by the scent of their fur. He runs through flaming forests to retrieve them. International Fund for Animal Welfare wrote on Facebook how valuable Bear’s talents are.

“We’re providing aid to our local partners Friends of the Koala who are rescuing burned wildlife—but Australia’s animals need more heroes to save them from this ongoing disaster.
Our koala detection dog Bear is an integral part of these rescue efforts.”

Bear has already been deployed to some of the hardest hit areas, including southeast Queensland.

“These devastating fires have destroyed critical koala habitat and claimed the lives of hundreds of koalas and other native wildlife, so Bear’s powerful nose is an important asset in locating survivors.”

“Now, more than ever, saving individual koalas is critical. With such an intense start to the bushfire season, it will be many weeks and months before some of these fires are out.”

How Bear Got His Job

Bear’s journey to his awesome career started with a disorder. His owners surrendered him when he was diagnosed with obsessive-compulsive disorder. His OCD didn’t exactly make him a good family animal, as dogs with this condition don’t really like to play. However, it made him an ideal detection dog.

The University of the Sunshine Coast rescued Bear from the shelter and began training him to track koalas. The pup more than excelled at this task.

Bear is actually the only dog in the entire country who can track down a koala based on both the scents of its feces and its fur!

“Once he finds a koala, he sits very still to indicate to a human that he is near a koala. He’s then rewarded with a ball which he’ll chase.”

For now, Bear and the rest of his human team are on standby waiting to help out wherever they’re needed in New South Wales and Queensland. If you want to help the koalas and the hard-working Bear, you can donate here.