UPDATE: Dog Who Saved His Vietnam Veteran Dad From A Fire Is Honored 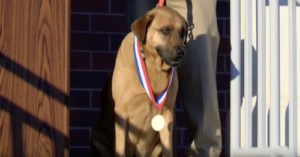 Brian Rand from South Carolina recently suffered a tragedy. His house burned down with all his belongings inside of it. However, he is still cheerful and positive because if it weren’t for his best friend, a rescue dog named Curly, he might not have made it out alive. Rand is just grateful that he still has Curly by his side, and he is truly amazed that his brave and heroic dog was able to save his life that night.

Now, Curly is being recognized for his amazing rescue. The community of Beaufort County has decided to come together to give Curly the recognition he deserves. They were all impressed that he knew exactly what to do during a tragedy.

Rand happily brought Curly to town hall to receive an honorable medal. Curly walked up the stairs to a podium with Rand by his side the entire time. Both of them seem very happy that they were able to attend this amazing ceremony.

Dozens of people gathered at the steps in front of the town hall to honor Curly. First responders, town officials, and even Curly’s girlfriend, Maddie, attended. They all watched proudly as Curly made his way up the steps. A medal was placed around Curly’s neck to symbolize his bravery.

Everyone in the area knows and loves Curly. Curly is especially familiar with the people that give him treats. He is always excited to get attention, and that was especially clear at the ceremony. He approached lots of different people in hopes of getting pet.

“You’re not their owners, you are their best friends and they’re your best friends,” said a speaker at the ceremony. “That’s all we ever ask a hero to be. It’s a best friend that does the right thing.”

He was right. Curly and Rand are best friends without a doubt, and even though Rand lost some irreplaceable belongings, the thing he cares about most is that he and Curly are both still alive. As long as his loyal dog is with him, he knows things will work out in the end.

“I still have Curly. That’s why I’m still more upbeat,” said Rand. “I got Curly. We can make it.”

Life’s better with a loyal dog by your side. Despite everything Rand has been through, he knows it could’ve been worse without Curly. This ceremony was the perfect way to celebrate that bond between a human and his loving dog because dogs really are our best friends.

The post UPDATE: Dog Who Saved His Vietnam Veteran Dad From A Fire Is Honored appeared first on iHeartDogs.com.