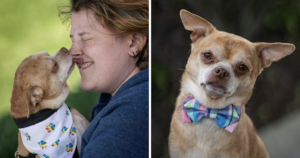 In April 2021, the most brutally honest adoption description led to Prancer the “demonic” Chihuahua finding a forever home. Somehow, calling the dog a “Chucky doll in a dog’s body” led to Prancer getting an overwhelming amount of applications. Eventually, it even brought him to his perfect family.

Now, months later, Prancer’s new mom can’t help but gush about how much she loves him. While he might be a “haunted Victorian child” around other humans and dogs, he’s loving and loyal to his forever family. In fact, his mom even revealed that this once hateful dog has now helped her heal from past trauma.

Ariel Davis adopted Prancer shortly after his foster mom, Tyfanee Fortuna, posted a humorous description of him. Many foster families try to sugarcoat their dog’s flaws, but Fortuna didn’t hold back.

“I’ve tried for the last several months to post this dog for adoption and make him sound … palatable. The problem is, he’s just not,” Fortuna wrote. “There’s not a very big market for neurotic, man-hating, animal-hating, children-hating dogs that look like gremlins. But I have to believe there’s someone out there for Prancer because I am tired, and so is my family.”

And as it turns out, Davis was his perfect match. Of all the applicants, Fortuna’s family knew that Davis was the one for this special Chihuahua. So, Davis opened her home to Prancer to give him a chance to show off his loving side. Before getting rescued, Prancer had lived with an elderly woman until she passed away and left him alone, so of course, that wasn’t easy on him. He just needed a second chance in the right environment.

But love goes both ways. While Prancer got more comfortable around Davis, he helped Davis too. Davis had spent 15 years of her life dealing with trauma and drug abuse. It caused her to lose her furry friends at the time.

“I did have two dogs that I did take good care of, but my addiction spiraled, and about three years ago, it got to the point where I had to enter a treatment facility, so I came up to Connecticut, and unfortunately, I had to rehome my dogs, both Blue and Doodle,” said Davis.

All Dogs Can Be Perfect

When Davis read about Prancer, she explained that he reminded her a lot of Doodle, who was one of the dogs she surrendered. Davis lived with no men or other pets, so she had the home Prancer was looking for. She wasn’t at all intimidated by his behavioral problems.

“I’m used to dealing with animals that struggle, that have anxiety disorders, that don’t get along well with other animals or other people, and I felt right off the bat, this little kinship with Prancer that he spoke my language and I spoke his,” said Davis.

Since Prancer’s adoption, Davis has even described him as “perfect” for her. It’s interesting considering how imperfect he was at his foster home. Yet, it just goes to show that every dog can seem perfect to the right family. Davis thinks that life with Prancer is even better than she could’ve imagined.

“It’s been absolute heaven even through the struggles because life is about struggles. Nobody has a perfect life. Nothing’s ever perfect. It’s about what you make of the situation,” Davis said.

Davis is proud to say that meeting Prancer was like love at first sight. Both Davis and Prancer are so lucky to have each other.