UPDATE: Couple Who Saved Dog From Icy Lake Enjoy A Day Of Surprises On ‘Ellen’ 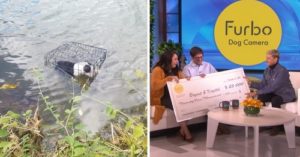 Earlier this month, middle school teacher, Bryant Fritz headed to Illinois’ Lake Kaufman for a relaxing day of fishing. Instead of a cooler full of fish, he ended up pulling a desperate dog from the icy waters. The pup, now named Dory, was intentionally dumped and left to drown.

Dory, named after Ellen Degeneres’ perky fish character in Finding Nemo/Finding Dory, proved to be a fighter, and is currently recovering at the University of Illinois Veterinary Teaching Hospital.

Meanwhile, her story went viral, catching the attention of Ellen herself! The talk show queen even invited Bryant and Krystal to appear on her show. Together, they told Dory’s story and reported their plans to bring her home just as soon as she is released from the hospital.

Ellen asked the couple of eleven years if they planned to get married. That’s when Bryant revealed his surprise for Krystal – an on-air marriage proposal in front of Ellen and millions of viewers!

“Will you be the mother to our Dory? Will you be my wife? And will you marry me?” he asked as they both wept tears of joy.

As she is known to do, Ellen set up a few surprises of her own for the young couple. They left the stage with a massive wagon packed with customized goodies from Ellen’s pet supply line and a check for $25,000 courtesy of Furbo!

Watch the entire video below. Just make sure you have the tissues handy!

Bryant Fritz is a middle school science teacher at Next Generation School in Champaign, Illinois. He was out fishing over the weekend when he spotted something. As he got closer to the unidentified object, he was dumbstruck. He couldn’t believe his eyes when the full picture came into focus. Sticking out of the surface of Lake Kaufman was a puppy trapped inside a cage, halfway submerged in the frigid water.

He Waded Into the Water to Save the Dying Puppy

Bryant stripped off his several layers of sweatshirts as he waded into the water to save the freezing pup. The closer he got, the poor little pup knew she was getting the help she so desperately needed. As he got waist deep into the water, she started shaking uncontrollably. He carefully carried the cage onto dry land.

He didn’t think the poor girl was going to make it. He rushed her to the University of Illinois Veterinary Teaching Hospital where they immediately got to work on her. She had open wounds on her body with patches of skin missing. The vet team stated on Facebook, “The dog arrived with wounds that did not appear to be related to her time in the water.” Raw exposed skin was plainly visible.

Of course, she was suffering from hypothermia and vets at the teaching hospital said that she was unresponsive at first. Her body temperature was so low that the vets could not even get a reading on a thermometer when she first arrived. It took more than 3 hours of warming efforts to get her temperature back to normal. The team has named her Dory. Thank goodness this girl just kept swimming.

Police Need Help Finding the Perpetrator of This Heinous Crime

This story makes us wonder how in the world someone could make this choice. It is inconceivable. The only feasible answer is that a very sick person wished this poor helpless creature to suffer a slow, agonizing, and cruel death. That is exactly what would have happened if Bryant had not come along. The wounds on her body are evidence that this was not the first time this poor wet baby was abused, either. And despite all that some disgusting human being made her endure, she still loves, forgives, and seeks the protection of other humans, showing us once again, how wonderfully loyal dogs are.

The Champaign Police Department opened an investigation in the case and are urging anyone with security camera footage or information to contact police at 217-351-4545.

A Happy Ending from a Fated Meeting

Bryant’s own dog passed away a few years ago and he’s been thinking about getting another one. He has visited shelters with the knowledge that whomever he was supposed to adopt would be made clear to him. His experience saving Dory made things crystal clear. He plans to take Dory home forever once she is adoptable. She will be under continual care with animal control services until the police investigation is concluded and she is well enough to go home with Bryant. We cannot wait to see the photos of them being reunited to go home together, forever.

The post UPDATE: Couple Who Saved Dog From Icy Lake Enjoy A Day Of Surprises On ‘Ellen’ appeared first on iHeartDogs.com.