“Unicorn” Rescue Puppy Born With A Tail On His Face 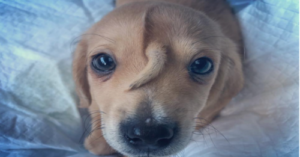 When you think of unicorn, you usually think of a mythical white horse with a horn, right? Well you’re not wrong, but the word “unicorn” is also used to represent something that’s beautiful and rare. A little rescue puppy named Narwhal is sort of a mix of both of those descriptions.

A rescue in Jackson, Missouri picked up a tiny puppy with a slight foot injury off the freezing streets in early November. That’s when they discovered it had a little tail right in the middle of its little forehead. Appropriately, they named the dog “Narwhal.”

Narwhal’s face tail appeared to be just a congenital facial defect, but the rescue wanted him fully checked out just in case. So Mac’s Mission posted a request for donations on Facebook in light of Narwhal’s rescue. They raised just over $1300 online.

After the puppy’s picture gained interest and tons of questions, Mac’s Mission shared another post on Facebook to explain what that extra tail means for Narwhal.

“The unicorn face tail does not bother Narwhal and he never slows down just like any normal puppy. He seems completely healthy other than some usual puppy worms he got meds for.”

To answer your most obvious question: no, sadly the tail does not wag. It’s just a cute little facial addition!

According to the veterinarian little Narwhal saw, there’s no need for the tail to be removed at this time. It isn’t connected to any bone or anything and appears to have no real use except making this guy unique. He’s happy just the way he is, especially now that he’s warm and loved.

Guess what Magical Unicorn Narwhal Puppy has a vet appointment for xrays today? Well since we only know of one magical unicorn narwhal puppy we maybe gave too much for this to be a tricky question… BOL!!! We think he appreciates not being outside in this terrible freezing snow mess. Love,MacKeeperOfUnicorns

Narwhal is still working on the growing up thing before he’s ready for adoption, but let’s hope this internet sensation ends up in the forever home he deserves soon! He’s currently living out his puppyhood in a foster home.

Narwhal’s condition is being monitored, but it looks like he’s just a puppy doing puppy stuff!

Physical defects may impact a dog’s adoptability for some, but the good people at Mac’s Mission understand that it’s what’s inside that counts.

If you have any interest in contributing to Narwhal’s care in the mean time, you can donate to Mac’s Mission via PayPal: macthepitbull@yahoo.com. The rescue specializes in Pitbulls but caters to all homeless animals with small chances and special needs.

Keep your eyes peeled for adoption updates- this may just be the closest you get to adopting a real unicorn.

The post “Unicorn” Rescue Puppy Born With A Tail On His Face appeared first on iHeartDogs.com.