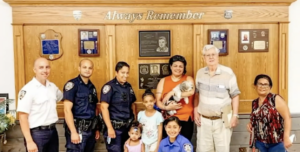 New York police officers found a small, scruffy dog named Lili, who seemed lost. By scanning her microchip, they were quickly able to contact Lili’s dad, who hadn’t seen her in years. But then, a woman arrived to report her missing dog. As soon as she saw Lili, the woman recognized her. So, Lili had two families claiming she belonged to them, leaving officials very confused.

As it turns out, Lili’s story is much more complicated than meets the eye. Both of her families were left with a difficult decision to make in the end.

A Story of Loss

Paul Carmody and his wife Ester welcomed Lili into their family only months before Ester died of cancer in 2017. Lili was Paul’s only companion after that, so they took walks together every day. Lili slept at the end of his bed and traveled with him as much as she could.

During Christmas of 2017, someone smashed the window of Paul’s car and stole Lili. She had a microchip, so Paul was hopeful that someone would return her. Yet, years went by, and even the help of police officers didn’t bring Lili home.

“I thought somebody eventually would take her to a groomer or vet that had a scanner and she would be found that way,” Paul said.

But when that day finally came over three years later, Paul couldn’t believe it. He received a call from the police department stating that they scanned Lili’s microchip, and Paul’s information came up. But shortly after he arrived at the police department, a woman came to claim the same dog.

An Act of Generosity

The police found Lili after a man brought her to them in a box. The man said he found the dog roaming around but couldn’t find the owner. As it turns out, Lili had run away from a woman named Elizabeth, who had cared for the pup for several years. In 2017, Elizabeth bought Lili from someone selling her on the street, not knowing she belonged to someone else.

So, both Paul and Elizabeth came to claim Lili, and they were both telling the truth. Lili had two families! This left both of them in a very confusing situation.

“She knew I was the owner, I patted her on the back and said please, don’t worry, we’ll work this out,” Paul said.

Paul could see that Elizabeth and Lili loved each other very much. So, he did the difficult thing and stepped back. He told Elizabeth she could keep Lili in her family.

Paul will miss his pup very much, but he’ll feel better now knowing that she’s in a loving home. Hopefully, he’ll still get to visit his furry friend from time to time!