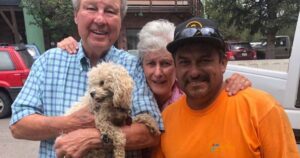 A cockapoo named Bella was reunited with her family after going missing in the Maroon Bells-Snowmass Wilderness. After getting separated from her family on a hike, the tiny pup defied the odds to make it back home.

Bella went missing while accompanying her family on a hike in the White River National Forest. Her fur parents, Betsy and Jim Chaffin, brought her along on an adventure with their extended family, as well as two other furry friends.

All of the pups were typically good about staying on the path and seemed to always travel in groups if they did walk off to explore. Bella at one point walked ahead of the group with the other dogs, and this is when the Chaffin’s lives were turned upside down.

At some point, Bella must have walked away from the path and set off on her own adventure. Whether she meant to or not, she stepped into a month-long solo journey.

Betsy and Jim quickly noticed that Bella was not with the others, and began a frantic search mission to locate their beloved pup. The couple had no idea how Bella could have strayed so far from the path in such a short time, but it was clear that she had made it far enough to not hear their desperate calls.

After searching the woods until sunset, the family left the trail absolutely defeated. They had no choice but to head home without their furry family member. Little did they know, they were about to endure a month of tireless searching.

The 10-month-old cockapoo may have had experience in exploring nearby trails, but she in no way was prepared to fend for herself in the lush forest. Bella must have gone into survival mode once realizing she was on her own, as she managed to make it out of this experience relatively harm-free.

As the next 4 weeks passed, the Chaffins exhausted every resource possible to find their missing furry friend. The couple reached out to local shelters, posted missing dog flyers online, placed food and shelter along the trail, and even reached out to a pet psychic in hopes of gaining extra insight. Just as they were beginning to lose hope, a Bella sighting gave them the push they needed to keep going.

The Chaffins received a tip from a local couple that recalled seeing a small white dog drinking from a creek near the location Bella went missing. The couple tried to approach the pup, but she was spooked and quickly ran back into the woods. The Chaffins knew that if she had managed to stay alive all this time, she must have a strong will to survive. With their hopes lifted and a deep love for their pup to pull them through, they continued their searching efforts.

It was a missing dog flyer posted along the trail that proved to be the saving grace that brought Bella home. A local who had seen the flyer spotted Bella along a road near the trail and made it his mission to bring her to safety. After coaxing the terrified pup to his side, he was finally able to scoop her up and put her in his car. Once Bella was finally out of harm’s way, the Chaffins received the phone call they had been hoping for.

Bella had lost over half her body weight, was covered in mats, and was even impaled by two porcupine quills. It was clear that she was truly fighting for her life in the time she was missing. After having her examined by their veterinarian, Bella began the road to recovery at her family’s side.

Though still tired from her exhausting ordeal, Bella is said to be doing well with the support of her family. The Chaffins refused to give up on their beloved Bella, and are willing to do whatever it takes to help her heal both physically and mentally.

“Was she eating grasses, cow pies, an occasional varmint? This is a drainage populated by coyotes, fox, mountain lion and bear — how did she manage to hide? What stories Bella could tell but will never be told.” – Betsy Chaffin

We are so happy to hear that Bella is safe and sound and back in the arms of her loving family. If our canine friends could share their experiences, we can only imagine what Bella would have to say!

The post Tiny Pup Survives In The Wilderness For A Month After Going Missing appeared first on iHeartDogs.com.