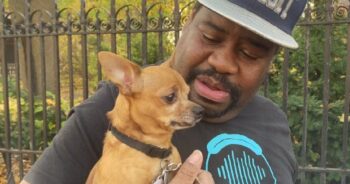 This Chihuahua may be small, but he does a really big job. He keeps his dad company at his assisted living facility and provides emotional support as his dad heals from multiple strokes and navigates his life post kidney transplant.

But then, one day, he mysteriously disappeared while his dad was inside the grocery store. And they were separated for two long weeks. Now, they’ve been miraculously reunited, and their reunion was captured on camera.

Over the course of a single week in 2016, Reuben Ray of Grand Rapids Michigan suffered two strokes and his kidneys started failing. That would have been a lot for anyone to handle, and he found it all extremely overwhelming. So his doctor suggested that he may benefit from the love and comfort of an emotional support dog

“It was too much actually, you know. I was breaking down. My doctor said, ‘It’ll lower your blood pressure, it’ll calm you down, it’ll be good all the way around.’ And it was,” Reuben explained.

Health professionals often prescribe emotional support animals to help ease anxiety, and to offer comfort to their patients while they deal with the challenges of serious illnesses.

That’s when Reuben brought home a tiny Chihuahua he named D-O-G, or O-G for short. Almost instantaneously, the pair became inseparable, and O-G was always by his daddy’s side during his six years undergoing dialysis.

“He’s always there. Just cheers me up. Keeps me in a good mood because sometimes dialysis and kidney failure would get you down. And he saw me through all those years of being on dialysis,” said Reuben.

The pair have been constant companions for the entire time Reuben waited for a transplant. So you can imagine how he must have felt when his sweet sidekick went missing.

Reuben brings O-G everywhere, so naturally he left him to wait in his car, with the window cracked, while he went into the grocery store. But when he returned an hour later, he realized he had accidentally left it unlocked, and his best friend was nowhere to be found.

His dad did everything he could think of to try and track down his beloved best friend. But despite looking over grocery store surveillance footage, looking all over town, and posting all over Facebook, he still didn’t have any clues. That was until Reuben was interviewed by his local news station and made a plea to the public for help finding his emotional support animal.

Shortly after the segment aired on tv, a woman spotted O-G hiding under a car, in an apartment complex parking lot. She recognized him from their news broadcast, and called the station to share the fantastic news.

After their reunion, Reuben expressed his extreme gratitude to everyone who helped him find his beloved best friend. You can check out the footage of their reunion, below.

The post Tiny Dog Huddled Under Car As Dad Wept For Him To Come Home appeared first on iHeartDogs.com.