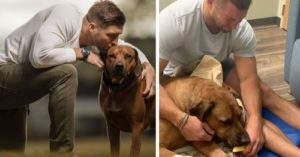 Athlete, Tim Tebow has had several ups and downs since beginning his NFL career in 2010. Through it all, his beloved dog, Bronco has been by his side.

On Thursday, Tebow posted a heart-wrenching update to his Instagram account. After nine years together, Bronco has passed away.

In a short video of the pair’s final goodbye, Tebow holds back tears while holding a treat for Bronco to chew. An I.V. can be seen in the dog’s right front leg.

“One of the toughest goodbyes,” the post reads. “Wanted to make a special tribute to the sweetest boy ever – thank you for all the joy you brought and all the memories. Aunt Patty, thank you for loving him, and thank you to all the other people including Miss Shea and Miss Mindy for sharing so much love with Bronco. If you had the pleasure of meeting Bronco, one of the best dogs ever, I would love to hear your story.”

Tebow also included a thank you message to the staff at SEVO-Med, Blue Pearl Vet and UF Small Animal Vet Hospital who took care of Bronco’s medical needs throughout his life.

Bronco, a Rhodesian Ridgeback, was given to Tebow as a puppy after the Heisman trophy winner was selected by the Denver Broncos in the 2010 NFL draft.

A second Instagram update shows Tebow in his signature prayer pose in front of Bronco’s grave. In it, he thanks his friends and fans for their kind words.

“I’m so thankful and humbled by everyone’s support, prayers and love,” the post reads. “I was able to lay Bronco to rest in a really special place. Thank you all for so much encouragement.”

Tebow also thanked Bronco – whom he often referred to as his son – for “being the sweetest boy.”

In honor of Tebow’s devotion to his pooch, iHeartDogs has donated 100 extra meals to shelter dogs in Bronco’s name.

Tebow officially retired from football in 2015 and has since focused on his philanthropic work with the Tim Tebow Foundation which helps children in need across the world.

He has also worked in broadcast as a college football analyst and played four seasons of minor league baseball with the New York Mets organization.