Thunder The Wonder Dog: The Cone Dog From The Woods Is Healing And Looking For A Family 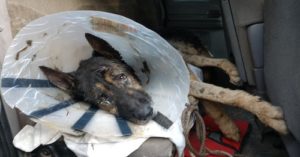 Davina Liberty and Sarah Grimes were shocked when they found an animal in need. They came across a dog limping when they were horseback riding in the Jackson State Forest in California. He appeared to be in really rough shape, but that wasn’t the most noticeable part. The poor dog was wearing a medical cone on his head and he had lots of wounds. So, Liberty knew that she had to do something to save this sweet pup.

The dog was clearly very scared. He was hesitant whenever people approached him, but Liberty refused to let that stop her. She carefully walked over to him and gently pet him. He showed no signs of aggression. In fact, he seemed to enjoy the affection. He was clearly just a loving dog that had somehow ended up in a horrible situation.

Right away, Liberty called for help. She could tell that the dog was in grave condition, so he needed to get proper medical attention as soon as possible.

This sweet dog received the name ‘Thunder the Wonder Dog: the Cone Dog from the Woods’. Madison Wade from ABC10 explained that his name is so long because his journey is even longer.

The Mendocino Coast Humane Society took Thunder in. Their medical team was able to look at his wounds and injuries more closely. They soon discovered that his condition was more serious than they thought.

The cone had been on his head so long that it was digging into his skin, so,it had to be surgically removed. In addition to that surgery, Thunder also had multiple wounds likely from wild animals.

Thunder has slowly started to recover since he was found. He is a sweet 7-year-old dog that just needed some love. It will take a long time for him to fully recover, but there are plenty of loving people that have helped him so far.

When Thunder arrived at the humane society, they discovered that he had a microchip. However, the information in that microchip hadn’t been updated since 2015. It said that he was from Nevada, so he had traveled about 300 miles!

Law enforcement was able to locate Thunder’s family. Since then, the family signed paperwork releasing Thunder into the humane society’s custody. Animal control is still investigating the situation, so they can’t give out much information on his past.

Even though Thunder is in need of a forever family, he’s not ready to be adopted just yet. He has a lot of healing left to do, so he won’t be adoptable until he fully recovers.

Many people have expressed interest in adopting Thunder, but the humane society thinks it will take him a long time to heal. They encourage everyone that is interested in him to go out and adopt another dog in need. Only one family will be able to adopt him, but there are plenty of other dogs out there waiting for a forever family.

So far, over $10,000 has been donated to help with Thunder’s needs. Everyone involved is very moved by the generosity of those supporting him. They even created a Facebook page for Thunder to keep everyone updated on his progress. He’s very lucky to have so many people cheering him on!

The post Thunder The Wonder Dog: The Cone Dog From The Woods Is Healing And Looking For A Family appeared first on iHeartDogs.com.