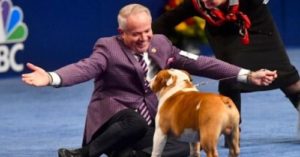 The endearing Bulldog named Thor took the win at the 2019 National Dog Show. With his impressive structure and lovable attitude, it’s no wonder he stole the show!

The bulky bulldog from Texas beat out nearly 2,000 other canines when he took the crown at this year’s dog show. As a stark contrast from last year’s Whippet winner, casual viewers find this year’s Best In Show a bit more relatable in terms of the average family dog.

The stage was filled with impressive canines when Thor won the non-sporting group and stood next to Daniel the Golden Retriever, Nick the Siberian Husky, Blaine the soft-coated Wheaten Terrier, Bono the Havanese, Maddie the Pharaoh Hound, and Sophie the Old English Sheepdog.

After taking a close look at each furry candidate, it was clear that Thor’s unique presence stood out from the rest. He was confident, lovable, and trotted so well next to his handler.

“He’s a dog that always gives everything for me. Thor is a very complete dog. He’s not just one piece, He’s many pieces together — what makes him move like a dream. The outline is beautiful, the head is beautiful — I love this dog.” – Thor’s handler

Though he may have been an unexpected winner compared to the usual champions, it was a welcome change to see America’s third most popular dog walk away with the win.

Leading up to Thor’s big moment in history, he has become a world traveler. He was born in Peru, lived briefly in Michigan, and now lives in Texas with his owner. His journey has taken him and his loved ones around the world.

While Thor is now a national dog show champion, he is still a normal pup when at home with his family. According to his owner, Thor spends most of his free time napping, sniffing out new smells, and cuddling up with his favorite people.

It was incredible to watch Thor take the win at this year’s national show, and we can’t wait to watch him continue to succeed in the future. Congratulations Thor!