This Dog Was So Matted He Could Hardly Walk – But Just Look At Him Now! 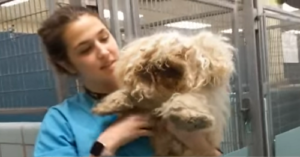 Officials at the Richmond SPCA consider Lionheart to be one of the worst neglect cases they have seen in decades. When the 7-year-old Poodle was surrendered to their care in April, he was so matted he was barely recognizable as a dog.

“When I first looked at Lionheart in the kennel run when he first arrived, I literally could not tell which was the front or the back,” Richmond SPCA CEO Robin Robertson Starr told WTVR News.

The filthy clumps of hair made it difficult for the dog to walk, eat, or drink.

Lionheart’s former owner told staff the dog had been hiding under a bed for the past two years. Even his meals were eaten in the dark space beneath the bed.

“Lionheart had been completely without any human attention and affection for a considerable amount of time,” Starr said.

With such severe matting, the veterinary staff could not fully assess Lionheart’s condition. They sedated him and quickly went to work removing pounds of hair and trimming his overgrown toenails.

It took several hours, but soon a beautiful little dog began to emerge!

Lionheart had several medical conditions to address before he could be placed for adoption. His skin was covered in sores, he had intestinal parasites, and he suffered from severe, untreated periodontal disease.

After months of professional care, Lionheart was ready to embark on his new life! According to his friends from the Richmond SPCA:

“He was quickly adopted by a compassionate and very loving new guardian who adores him.”

That new guardian is Bill Brown. He recently spoke to WTVR News about Lionheart, who he and his wife have renamed Cody.

“He was really skinny when we got him because they had to shave him to clean him up,” Brown said. “We were shocked to find out his background to tell the truth.”

Starr cites Cody’s story as a wonderful example of a rescue dog’s ability to overcome an abusive or neglectful past.

“Dogs are remarkably resilient creatures and have the capacity to keep loving humans,” she said. “They seem to always be willing to give humans another chance.”

The post This Dog Was So Matted He Could Hardly Walk – But Just Look At Him Now! appeared first on iHeartDogs.com.