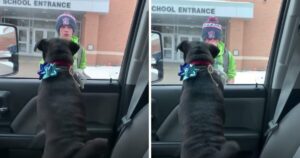 As evidence supports, dogs can really help heal emotional wounds. Studies have shown that petting a dog can reduce anxiety, and caring for one can help ease depression symptoms. Not to mention of course, the unconditional love dogs provide.

In 2017, a boy named Carter received Piper the Pug as a special 12th birthday gift. Carter’s younger brother had passed away from cancer at only 21 months old the year before, so you can imagine how much Piper meant to him. The little dog helped the entire family heal from immense pain.

One day in 2019 when Piper went missing on a bathroom break, Carter was completely devastated.

Incredibly, three weeks later, Carter’s mom April received a call from a local animal shelter. They told her Piper had been found.

Deciding to surprise her son at school pick-up, April put Piper in the car with her. She then filmed the most glorious and emotional reunion video of her 14-year-old son and his best friend.

The video opens on Carter leaving school and approaching the car. Piper wears a festive necklace of celebratory bows and sits next to April, who tells the pup:

That little curly Pug tail bounces like a super ball as Piper’s brother gets closer. It takes a second, but once he recognizes Piper in the car, Carter’s expression changes.

You can hear him audibly gasp. Before he even gets in to the front seat, he breaks down into tears.

He later told Inside Edition he never thought he’d see his dog again.

The video continues as Carter opens the door and immediately takes the dog into his lap, continuing to cry tears of joy as Piper gives him kisses. There’s no need to explain raw emotion like that.

“Having Her Home Makes Me Happy Again”

With his best friend safe and back in his arms, Carter feels “happy again.” He explained to Inside Edition:

“She was my birthday present when I was 12, and I guess she’s a Christmas present now.”

Dogs truly are a gift. This really shows how much joy a canine companion can bring to your life.

The post This Boy Reuniting With His Lost Pug Will Make You Sob Too appeared first on iHeartDogs.com.