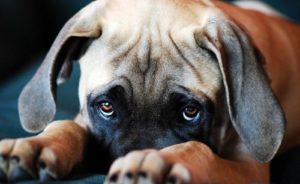 Sometimes, you see a video that has over 600,000 views and think “wait… that’s it?!” This isn’t one of those. It may be short, but the payoff is well worth it. I’ll keep you smiling all day.

Here’s the setup: an adorable baby in a onesie is leaning against his family’s pup who’s taking a little snooze. So we’re already off to a great start. Babies and dogs doing absolutely nothing is a good enough recipe for a viral video.

Soon the person behind the camera (presumably the baby’s mom) notes, “You look like you’re about to poo poo or something,” but thankfully she keeps filming. She actually even encourages her son to let it loose, so there’s quite some suspense building already.

The camera keeps rolling as the baby continues to squirm, the sleeping dog unaware of what’s clearly about to happen. Then the poop hits the diaper, and the dog is not about to tolerate it. He gets right off the couch to run to safety, but not before giving the baby a dirty look on his way.

The baffled baby is just left slumped over on the couch without a pup to lean on for support. It’s an image that’s hard to forget.

Of course, the ending is something you’re just going to want to see for yourself. And then see again. And again. And so on.

Something even better than this hilariously adorable video is the fact that an entire genre of dogs’ reactions to farts exists. I took no issue with doing the research, and I found hundreds of other videos like this on YouTube.

There are even some kind internet users who take the time to put together compilations of dogs and cats reacting to farts. This one is 3 full minutes long, but it honestly feels like 30 seconds. Time flies when you’re watching dogs react to farts… that’s what the saying is right? Well, it should be.

The categories get even more specific from there, ranging from dogs scaring themselves with their own farts to dogs being scared of other animals’ farts. Seriously, there’s no shortage of these, and I’ve now seen most of them.

So while there may be a lot of nonsense and depressing news on the internet, there’s also many many videos like these. And yes, maybe we film our dogs too often, but that’s how we end up with these little gems! I think it all pretty much evens out.