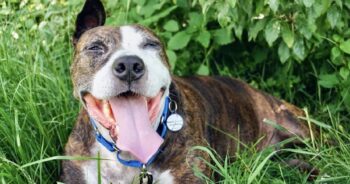 Vincent Van Gogh created incredible paintings, while also suffering symptoms of schizophrenia. He even sliced off a piece of his own ear during a mental health crisis. That’s why it’s so fitting that a dog rescued from a fighting ring with a missing ear (who also happens to make awesome artwork) is so perfectly named after the artist.

But despite hosting an event to show off his beautiful paintings, Van Gogh still hasn’t found a forever home.

When Van Gogh, the Boxer-Pitbull mix, was rescued from a North Carolina dog-fighting ring, his ear was so badly injured that it needed to be amputated. The sweet seven-year-old was being used as a bait dog, and wound up in really rough shape.

Jaclyn Gartner, the founder of Happily Furever After Rescue in Connecticut, had the fantastic idea of having Van Gogh create art to not only help raise money for their rescue, but to hopefully help him find a forever family.

How Does A Dog Make Art?

He paints with his tongue, of course! Once someone has squeezed a few different dollops of paint onto a canvas, they carefully slide it into a plastic bag and then coat the outside of the bag with delicious peanut butter.

This effect creates abstract art that’s interesting to view and soothing to the soul. What animal lover wouldn’t smile knowing that a piece of art on their wall was created by a dog? While the painting pup has sold 30 pieces averaging $40 each, he’s still searching for a forever home. Despite everything he’s been through, Van Gogh is a relaxed, well-mannered, cuddle bug.

“He would love someone who would cuddle him because he’s a cuddler,” said Jaclyn Gartner.

Not only would he love to snuggle up with you on your couch, but he’s already housetrained, knows “sit and paw,” and walks exceptionally well on leash. He’d prefer to be your only pet, as he’s dog selective and not fond of cats.

Because of his abusive past, his ideal home would be a quiet one. Van Gogh still startles easily from fast movements and is frightened by loud sounds. But, despite his age, he loves having his belly rubbed, and will zoom all around your yard. He’s 70 pounds of pure love!

Van Gogh’s adoption fee is $350 and he comes fully vaccinated, microchipped, neutered and heartworm negative. If you are interested in this precious pup, you can learn more about Van Gogh by clicking HERE.