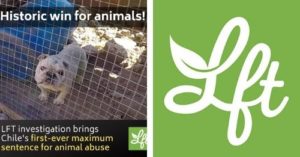 Animal cruelty laws can be quite frustrating in the eyes of animal lovers, since it seems as though these abusers don’t receive the punishment they deserve. Luckily, the animal advocacy group, Lady Freethinker, set out to take down a dog fighting ring in Chile, and worked relentlessly to achieve a harsher sentence.

It all began when a member of Lady Freethinker traveled to Chile in an effort to expose the illegal operation, and came across the unthinkable. Situated in the hills was a property owned by Gonzalo Ariel Rebolledo Robles, that held 24 dogs and dozens of chickens. Many of these dogs were ill, covered in scars, and without food or water.

Their only option for water were buckets filled with green slime, that was the result of water sitting for weeks on end. There were even cages filled with puppies that had already passed, and were left to decompose. In addition to these suffering dogs were hens and roosters used for cockfighting, who were housed in small cages and left unattended.

Sharing the footage got the attention of several animal advocacy groups, and finally got an advocacy group to come down to the scene and see the abuse for themselves. Once they arrived they found several dead dogs, with the rest of the dogs on the way to death by starvation. In this visit they were able to make a strong case, and finally put this abuser behind bars.

Since deaths were involved in the investigation, an increased sentence was able to be enforced for Robles. Robles received a sentence of 3 years in prison and a maximum fine of three “monthly tax units.” He will also never be able to own an animal again.

21 dogs were rescued during the raid, who went on to receive the care and love that they had always deserved. Thanks to LFT and the local activists who worked so hard to fight for these animals, a new light has been shed on animal abuse in the region. Hopefully this case will help to instill fear to those who wish to run illegal operations, and keep them from harming any undeserving lives!

This sentence was the result of years of animal advocacy, and a strong push from the public asking for harsher penalties for animal abusers. Though the slow evolvement of the laws surrounding animal cruelty can begin to feel hopeless, it’s important to remember how far we have come! The perseverance of dedicated animal lovers have made this outcome a reality, and will only continue to improve if we stick to it!

We are so proud of this incredible victory for the country of Chile, and hope that this case will have a global impact. If you would like to help make a difference in the lives of animals, consider signing LFT’s petition to help make animal cruelty a felony in the US.