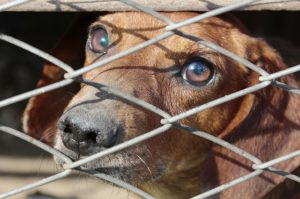 WARNING: Contains photos that some may find extremely saddening.

Every year The Humane Society of the United States releases it’s “Horrible Hundred” list – a list of puppy mills who have been found to be irresponsibly breeding pups for profit in the U.S. The list typically includes breeders with sick or injured dogs, dogs kept in disgusting, unsafe environments, and breeders who sell without proper licensing – and worse offenses.

The goal of the list is to bring attention to the puppy mill problem in the United States and educate those looking to buy. The HSUS compiles the list by researching state and federal (USDA) reports, and warnings and violations found during inspections by state and federal authorities and takes into account whether the breeder is a “repeat offender.”

“Diana Burden in Nebraska was found with more violations in 2017, even after appearing in our prior Horrible Hundred report. She was issued another official warning by the state and ordered to downsize the kennel. Inspectors repeatedly found unsanitary conditions.” – HSUS

This year, the USDA chose to conceal the names of the breeders in their records – making it difficult to compile the list. The Humane Society sued the USDA for the redacted information in the requested files under the Freedom of Information Act, and although Congress asked that the information be provided, the USDA has yet to comply. HSUS still managed to put together their Horrible Hundred list with help from state records and incomplete USDA records, but many of the bad breeders listed remain nameless despite their detective work because of the USDA’s refusal to cooperate, and many can only be guessed.

“Nebraska state inspectors cited a dog breeder in Fort Calhoun named Jeff Dross with “unacceptable” conditions in July 2017. Unsanitary conditions were cited at this inspection, including accumulations of feces. When state inspectors returned again in December, there were additional violations, including a repeat issue with feces buildup, with pens that had not been cleaned for 5-7 days, according to the inspection report.” – HSUS

They had a somewhat similar issue last year, when the USDA removed animal welfare records from it’s website, making them more difficult to access.

HSUS expressed some other concerns about the attitude of the USDA towards animal welfare recently. Not only did the USDA choose not to release the names of puppy mill violators, they also sent licensees a letter stating that they were considering letting them know when they would drop in for inspections in advance, which would allow bad breeders to hide their crimes – and could put the lives of mistreated and sick dogs at immediate risk. (The report shows that it’s not unusual for sick or injured dogs to “disappear” between inspections.) The USDA also proposed allowing third-party groups to inspect puppy mills, which the HSUS says “could allow industry groups that have a financial stake in perpetuating puppy mills to be part of the inspection process, effectively putting the fox in charge of the henhouse.”

“Mark Griesman operates a dog breeding facility between two locations in Nebraska. State inspectors conducted several inspections in 2017 between the two properties and found numerous issues. In November 2017, when inspectors visited the Wood River location, additional violations were noted, including a dog named Victor that suffered from “a puncture wound under [the] right eye” that had occurred two days earlier and had not been seen by a vet.” -HSUS

They also report that the USDA has not revoked ANY breeder licenses since HSUS released the 2017 Horrible Hundred Report – this is especially troubling given the information in the 2018 report. Violations include keeping dogs in buildings that reached extreme temperatures, dogs who were spotted in need immediate veterinary care, deceased pets in kennels, and breeders who were warned repeatedly but made no changes and continue to operate licensed puppy mills.

Even without the names of all the breeders, HSUS is committed to exposing bad breeders and attempting to warn potential buyers – eventually making life better for all dogs. They managed to pull together their horrible hundred list without the full records from the USDA, and sadly, the report only shows that the problem has yet to go away.

“At an unidentified USDA licensed breeding kennel in Lucas, IA, an inspector found 17 dogs needing veterinary care; ten of them disappeared before the next inspection. Dogs had infections and injuries, including dental disease and a male shih tzu with a raw, open wound on his paw.” – HSUS

The Humane Society of the United States Horrible Hundred List 2018:

Other states may be excluded from this year’s list based on a lack of information. Kentucky, Minnesota, New Jersey, Oklahoma, Tennesee and Texas all made the list last year with multiple repeat offenders. (Texas had 7 bad breeders on the 2017 list – more than the other five states combined.)

You can read the full report here, but be warned that it contains extremely gruesome descriptions and some disturbing images.

Reminder: these are only the worst 100 – there are many more puppy mills out there. It can be difficult to tell whether a breeder actually cares for their animals, and many of these nightmarish scenes are never seen by potential buyers looking to add a cute, cuddly pup to their family. Putting money in the pocket of bad breeders only makes the problem worse. Adopt, don’t shop.