Teens Find Injured Dog Near Busy Road And Save His Life 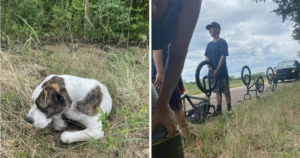 Three young teenagers biked alongside a road in Acadia Parish, Louisiana. They were just out there to have fun, but they soon became heroes. On their trip, they biked past a dog lying in the grass.

Most kids probably wouldn’t have even noticed the poor pup, but they came to an abrupt stop. The dog wasn’t moving, and he looked very weak. They realized that the injured dog might not survive without their help. So, the boys stopped biking to save the dog.

Anyone Can Be a Hero

It’s unclear exactly how the dog ended up like that. Unfortunately, he might’ve been hit by a car. The boys knew they needed professional help for the dog, so 13-year-old Wade Harrell called Haseya’s New Beginning Animal Rescue.

Wade and his friends, Tyler Cancienne and Brayden Mauroner, waited with the dog until help arrived. In the meantime, they placed their bikes upside-down along the road to provide a barricade. They didn’t want anyone driving too close to the dog, so the bikes were like substitutes for orange cones.

The dog was unable to move on his own, but the boys noticed that his eyes moved now and then. That’s how they knew there was still hope for him. Luckily, the dog rescue staff quickly came to the scene, parking their car in front of the barricade of bikes.

“If they wouldn’t have showed up, he probably wouldn’t have made it. It’s so crazy because they could’ve not been riding on that part of the road,” said Katie LeBlanc, a volunteer with Haseya’s New Beginning.

The Dog is Safe!

The staff lifted the dog in a blanket like a hammock to make sure they didn’t hurt him more. Then, they drove him back to the shelter to give him a comfortable place to recover. He seemed to be limping on his back leg, possibly due to a hip injury. They gave him pain medication, food, and a comfortable bed while they waited to assess his injuries further.

“It made me feel happy because I knew that we saved the dog,” said Wade. “Because we gave the dog a second chance that he possibly could’ve never had.”

At first, the rescue wanted to name him Wade in honor of the boy who saved him. However, as it turns out, the dog already had a forever home. His family saw the post about him on Facebook and explained that he was their dog named Taz. Taz had been lost for about a week, so his family was relieved to see that he was safe.

More than anything, Taz’s family and the shelter are grateful that the teens happened to be in the right place at the right time. Other kids might’ve biked right past him, but they stopped to do what was right. It’s an incredible moment that will stick with them for the rest of their lives.

The post Teens Find Injured Dog Near Busy Road And Save His Life appeared first on iHeartDogs.com.