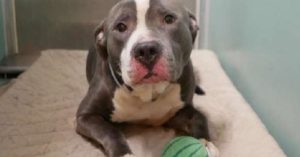 Freshy the Pit Bull found himself abandoned by his family, with just hours to live in a packed animal shelter in New York. This was a new reality for Freshy, seeing as he once had everything he could have ever wanted.

Freshy came from a once loving home. He lived a happy life with a family of four children, two dogs, and one cat. He was the definition of the perfect family dog. What was once a big happy family for this home, soon became too overwhelming when his owners became pregnant with one more child. They decided that having three dogs was too much for this family, and dumped Freshy at the shelter.

Not only was Freshy facing incredible heartbreak with the loss of his family, but he was also placed in an extremely high-kill shelter. With the high rate of animals coming through the doors, Freshy’s time was soon running out. When October 11, 2018 came, this loving pup had until 5:00pm to find a loving home, or he would be euthanized. Luckily, he had a hard working Facebook user named Julie Carner on his side.

Julie Carner worked to spread photos of Freshy as far as she could, hoping to catch the eye of an interested adopter. With her photos she was able to reach Alana Guerrini, a dedicated foster and volunteer for the Eleventh Hour Rescue.

“You could see the fear and terror in her eyes in that picture. And how brokenhearted she was. I looked at that face and it absolutely crushed me”-Guerrini

Guerrini and her son rushed across town as quickly as she could, fighting the clock to make it to the shelter on time. With just minutes to spare, she was able to rescue Freshy from the euthanasia list. Freshy eagerly jumped into her car, and was elated to be in the presence of a loving family again.

Freshy took on the new name of Stormy, and began his new life with his foster family! In his foster home he proved just how loving he truly was, and how thankful he was to be a part of a family again. In his time spent in the Guerrini home, Alana truly fell in love. She knew she had to find the perfect family for him.

Guerrini made it her mission to find the absolute best home for Stormy. After a few weeks of being on the hunt, she found an amazing home for the once abandoned pup.

“He was adopted and his family sends me pictures and videos a lot. He’s all smiles all the time and I couldn’t be happier for him.

“We do our best to help these babies. This is one very happy ending, and the new beginning he deserved!”-Guerrini

Stormy is one of the success stories from the shelter, but many loving animals have yet to find their happy ending. By adopting a shelter pet you can change the life of a grateful animal, and provide a life of happiness to a deserving soul! Just sharing photos saved Stormy’s life!

The post Sweet Pittie Was Minutes from Being Euthanized – but One Simple Action Saved His Life appeared first on iHeartDogs.com.