Suicidal Veteran Saved By His Pit Bull, Inspired To Help Thousands Others Find Pups Of Their Own 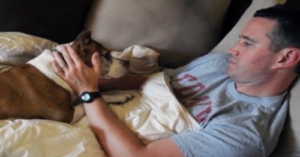 There’s really no doubt about it at this point: countless examples of service dogs transforming the lives of U.S. veterans demonstrate how valuable these incredible animals are. Having had such an experience with his own service dog, one veteran wanted to help others find the same life-changing support.

David Sharpe is a veteran of the United States Air Force who suffers from Post Traumatic Stress Disorder (PTSD.) He’s also founder of the organization Companions for Heroes which provides veterans and first responders with support animals.

In a moving interview with Daily Caller, Sharpe stresses how important service dogs are to veterans’ care following active duty. He speaks from personal experience and from the heart.

Sharpe shared that he was quite literally on the brink of committing suicide. His rescue Pit Bull Cheyenne saved his life.

“She looked up at me with that soulful look, if you know what a dog or cat gives you, that look that I’m here for you— what are you doing?”

Cheyenne is the one who inspired Sharpe to help others like him find their dog saviors. She would later train to become an official service dog.

The organization was founded in 2009. Since then, Companions for Heroes has helped over 4,000 people and as many dogs, including veterans and military spouses and children. Knowing friends and fellow servicemen who have taken their own lives, Sharpe is well aware of the terrible toll that takes on a person’s family.

“I got to see firsthand the torment and the struggle family members go through… that really hit a chord with me.”

The organization trains both companion dogs and service dogs (all former rescues) catering to the different needs of people who have served and their families.

The Companions for Heroes website boils it all down to a simple mission.

“Sharpe’s hope is that Companions for Heroes (C4H) will aid them in their recovery while at the same time saving our nation’s shelter and rescue animals.”

As the organization continues to help people and pups, Sharpe has never forgotten the dog who saved him and helped him save so many others: Cheyenne. In a touching Facebook post, he shared her photo along with a caption of thanks.

“Happy Dog Day to the one who pulled me from the trenches, gave me a 2nd chance, became an inspiration to help others through Companions For Heroes, and led me to my adoring wife, Jenny and son, Dax. I thank the Big Guy every night for this angel and being a personal protector for our son! Love ya, Chey.”

Here’s to giving Veteran service dogs their very own holiday!

The post Suicidal Veteran Saved By His Pit Bull, Inspired To Help Thousands Others Find Pups Of Their Own appeared first on iHeartDogs.com.