Study Shows That Your Dog Can Rescue You Even Without Training 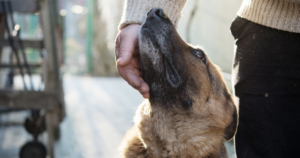 There have been many stories of dogs saving their humans from danger. Some dogs have alerted people of a fire or fought off a dangerous animal. Most dog lovers would agree that it’s because our dogs love us so much. But how can they rescue us without being properly trained?

Joshua Van Bourg, a graduate student at Arizona State University’s Department of Psychology, and Clive Wynne, an ASU professor of psychology and director of the Canine Science Collaboratory at ASU, decided to conduct a study to answer this question.

The two men have observed dogs rescuing people in the past. However, they wanted to find out why dogs do it and how they know what to do without being told. So, they conducted three tests to analyze the behaviors of 60 different dogs.

In the main test, each dog’s parent sat inside a large box. The box had a light-weight door that the dog could easily move aside. While inside the box, the person would call for help repeatedly. They were not allowed to say the dog’s name because they wanted to see if the dogs would react out of concern rather than obedience. Additionally, the people were coached on how to sound distressed to make it feel more real for the dogs.

“About one-third of the dogs rescued their distressed owner, which doesn’t sound too impressive on its own, but really is impressive when you take a closer look,” said Van Bourg.

So, they conducted two more tests to further understand the dogs’ motivations. They wanted to know if the dogs rescued their parents because they wanted to be with them or because they sensed that something was wrong. They also wanted to understand whether or not the dogs could figure out how to open the door if it wasn’t an emergency.

In the first control test, the dogs watched someone drop food into the box that the person had been in. This was a test to see if the dogs could figure out how to open the box on their own. Surprisingly, only 19 of the 60 dogs opened the box to get the food. That was less than the number of dogs that rescued their humans.

Then, they conducted another test where the person was inside the box again. This time, the person remained calm. They read a magazine out loud so the dog could recognize that they were in the box. This test was to see if the dogs would open the box just to be near the person.

This time, only 16 out of the 60 dogs opened the box, which was the lowest number yet. That discovery went against the idea that dogs might rescue humans just to be close to them.

In all three scenarios, the researchers also took notes on the dogs’ behaviors. Specifically, they kept an eye out for behaviors that signaled stress such as whining, pacing, barking, or yawning. As expected, when their parent acted distressed, they responded in a worried manner. In the control tests, only one dog whined in total.

This proved that the dogs could sense when their parents were in danger. When the distress portion of the test was repeated two more times, the dogs seemed equally concerned, even though they had already been through the situation before.

What Do the Results Tell Us?

After considering the behaviors from all three tests, it was concluded that the dogs reacted emotionally above everything else. When given the option of getting food or being near their humans, dogs were less likely to do those than they were to save their humans. While some dogs didn’t know how to open the box, they still seemed worried about their humans.

“The results from the control tests indicate that dogs who fail to rescue their people are unable to understand what to do. It’s not that they don’t care about their people,” said Wynne.

So, if you needed any more proof that your furry friend loves you, this is the perfect example. Not every dog is capable of saving you under pressure, but most of them will try their best.

Watch a Clip From the Study Here:

The post Study Shows That Your Dog Can Rescue You Even Without Training appeared first on iHeartDogs.com.