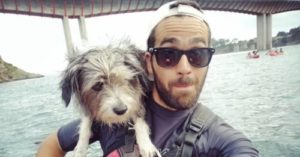 Sergi has always craved adventure, so it was no surprise that he took on the challenge of sailing across the ocean all by himself. Though he knew he had years of incredible experiences ahead of him, he had no idea that he would acquire a furry sailing partner along the way.

During Sergi’s journey he made a pit stop in Sardinia, Italy. What he thought would be a regular pit stop turned into the place in which he would meet his very best friend, Nirvana.

Sergi found Nirvana wondering the streets of Saldinia. Though she was friendly, it was clear that she had been severely neglected. After taking her to a local veterinarian to make sure she was healthy, he made the decision to take her along on his adventures.

He knew it would be an adjustment, but he couldn’t stand the thought of leaving sweet Nirvana behind.

Once Sergi made Nirvana a member of the canoe crew, it was time to teach her the ins and outs of living on the ocean. To Sergi’s surprise, Nirvana caught to her new lifestyle in a flash.

It’s as if Nirvana knew this was how her life was meant to be, as she quickly became the perfect boat dog. She was well behaved, easily stayed on their canoe during their travels, jumped into the water to swim when they were close to shore, and even jumped on to rocks that would cross their path. She was born to be a sailor!

Sergi and Nirvana went on to experience some of the most incredible adventures you could even imagine. They sailed through crystal clear waters, hiked through mountains, and canoed through underwater caves.

Though their sailing adventures started about 6 years ago, they are still living the dream to this day. Sergi and Nirvana are still chasing the next adventure, but now they have a new comrade to add to their crew.

Nirvana stumbled upon an abandoned kitten while she was sniffing around a town in Spain. The two took the days old kitten back to their home, where they bottle raised him and officially welcomed him into their special family.

Nirvana and Goku are now the best of friends and do absolutely everything together. If you see Nirvana, then you are sure to see Goku right beside her. They have a bond like no other and will get to experience a lifetime of adventures together!