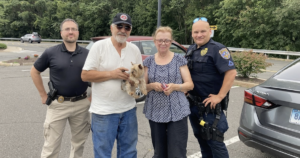 An 8-year-old Yorkie named Cookie was stolen from his yard in Meriden, Connecticut. For several days, his family had no idea where he was until they saw a suspicious ad online. Someone was selling a dog that looked just like Cookie, claiming he was an expensive puppy. Of course, the family recognized the dog as Cookie right away.

With the help of the police, they came up with a plan to get their furry friend back. The case isn’t closed yet, but at least Cookie is safe with the humans who love him.

A few days after Cookie was taken from his yard, a 16-year-old family member found a clue. Someone listed a Yorkie for sale on a mobile market website. The Yorkie looked exactly like Cookie but was listed as a 4-month-old puppy for $1,800.

Cookie’s family members knew that the dog for sale was their lost canine. So, they contacted the police and alerted them of the post. An officer went undercover to retrieve the dog without causing any suspicion.

“We’re all dog lovers, so we can empathize how this family felt losing a family member,” said Lt. Shane Phillips. “Cookie had some unique identifiers that we needed to physically have contact with Cookie to be able to identify these features to determine if he was the stolen dog.”

The undercover officer pretended to be someone interested in buying the dog. They met with the person selling the “puppy” to determine that the dog was Cookie before taking action. Of course, when Cookie saw his humans, that proved his identity even further.

In a reunion video, Cookie snuggled right up to his mom and leaned forward to give his dad some kisses. He was so happy that the nightmare was over. Being with his family is all he could ever dream of.

“Cookie the dog was happy. As we were pulling up the dog was jumping around the car really excited to see the family, so we didn’t need confirmation that it was Cookie but if we needed it that was it,” Phillips said.

Police are still investigating the situation, but they haven’t made any arrests yet. They plan to make arrests in the future, though, and those involved will face larceny charges. It’s important to hold these individuals responsible, so no other dogs have to go through this. Dogs are family members, not property.

The post Stolen Senior Yorkie Found After Being Listed For Sale As A “Puppy” appeared first on iHeartDogs.com.