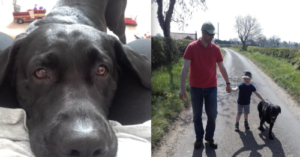 Alfie the Labrador Retriever is an important member of his family. His parents, Shaun Traves and Laura Bland-Traves, love him very much. Their son, Charlie, can’t live without him. So when their truck was stolen with Alfie stuck in the back, they were horrified. They couldn’t imagine a life without their sweet Alfie. They began to search long and hard. They were determined to bring him home as soon as possible.

Alfie had been in a crate in the back of the truck when it was stolen. The truck was recovered a few days later, but Alfie was not inside. His family feared the worst.

“It was devastating. We didn’t know where he was, whether they had dumped him or if he had been sold,” said Laura.

Despite their fearful thoughts, Shaun and Laura continued their search for Alfie. They knew that they needed all the help they could get, so they turned to the internet.

The Help of the Community

Shaun and Laura ended up creating a Facebook group to help find Alfie. To their surprise, over 2,000 people joined right away. All of them were fellow dog lovers in the area. They wanted to do everything they could to help find Alfie.

The members of the Facebook group shared posts and information about Alfie. They worked hard to spread the word as much as possible. They even shared sightings of stray dogs that could be Alfie.

“People are just so kind. It really shocked us how generous people are,” said Laura.

The family ended up using a specialist dog tracker to help find Alfie as well. All this extra work paid off because in about 2 weeks, Alfie was found. It isn’t clear exactly where Alfie had been all this time, but he sure was happy to be home.

Luckily, Alfie returned home just in time for Christmas. He ran right into the house and picked up his favorite toy. Whatever happened to him did not affect his cheerful spirit.

Alfie was very skinny when his family picked him up. The vet informed them that it looked like someone had tried to remove his microchip, but they were not successful. Alfie seemed to be in good shape other than that. He looked healthy and ready to return to his normal life.

This whole experience was scary for everyone, especially for 4-year-old Charlie. Charlie didn’t want to go to school after Alfie returned. He didn’t want to leave Alfie because he was scared that someone would steal his best friend again. But his parents will do everything they can to make sure that it doesn’t happen again.

Things are slowly getting back to normal for Alfie and his family. Alfie is safe and sound now, which is what matters the most. Hopefully the person that did this will be caught and punished for their horrible actions. But for now, Alfie is just going to enjoy his Christmas in the safety of his own home.

The post Stolen Lab Is Now Home For Christmas appeared first on iHeartDogs.com.