Stolen Dog Rescued And Reunited With Family One Year Later 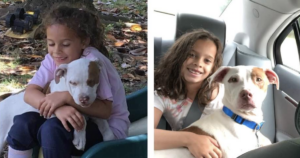 About one year ago, Diesel the Lab and Pit Bull mix was reported stolen. He was dragged out of his South Carolina yard when his family wasn’t looking. Tiffaney Capell, his mom, put up fliers to help bring him home, but months went by with no luck. She began to lose hope of her dog returning, but her daughter, Elise, never gave up.

The little girl continuously prayed that their sweet dog would one day return home. Even when all hope seemed lost, Elise never stopped believing. As it turns out, it all paid off because her prayers were answered a year later.

Cpl. Kristen Gregory with the Sumter County Sheriff’s Office received a call about a neglected dog in the area. When she found the reported dog in a yard, she didn’t know it was Diesel. However, it was clear that the dog was not well cared for. Gregory determined that the dog was in poor condition and had to be removed from the home.

Sumter Animal Control arrived at the scene and took Diesel into their custody. For about a month after the dog’s rescue, they continuously tried to contact the person who had neglected him. No one in the household ever responded to their calls. So, they decided it was time to put the dog up for adoption to find him a more loving home.

However, a volunteer with Saving Sumter’s Strays quickly realized that the dog looked familiar. She told animal control that she thought the dog was the same one in Capell’s lost dog photos. So, animal control compared the photos to the dog and came to the same conclusion. The dog was probably Diesel.

Capell was contacted right away to come identify the rescued dog. They reminded her that there was a chance that the dog wasn’t Diesel, but they suspected that he was. Capell and Elise came to the scene, trying not to get their hopes up too much.

Even before they arrived at the shelter, Elise told her mom that she had a feeling the dog was Diesel. Sure enough, when they arrived, the dog ran straight for the family with a wagging tail. He clearly recognized them right away. Elise was right, the rescued dog was Diesel!

“The sequence of events that had to align for this dog to find its [family] is astounding,” said Captain Misty Lee with the Sumter County Sheriff’s Office.

Officers are still trying to contact the person who is responsible for neglecting Diesel. They stated that charges are forthcoming. While the person responsible deserves to be punished for their actions, it’s still incredible that Diesel was able to find his way home. Capell said that her daughter taught the whole family a valuable lesson about never losing hope.

On Friday, May 8, a Sumter family was reunited with their dog after it was reported stolen from their property almost one year ago. The reunion was possible because of the efforts of volunteers and sworn officers. On March 13, Cpl. Kristen Gregory with Sumter County Sheriff’s Office responded to a residence on Griffin Lane in reference to a neglected dog in the yard. Looking at the dog, Gregory realized the canine was in poor condition and could not remain at the residence. Sumter Animal Control responded to the scene and removed the dog. For more than a month after the dog’s removal, Capt. Misty Lee, SCSO, and Sumter Animal Control attempted to contact the person believed to be the dog’s owner. Lee decided to release the dog for rescue or adoption on May 6 after the person living at the residence failed to respond to phone calls, house visits, a letter and posts left at the house. The next day, Amy Frey with Saving Sumter’s Strays — a nonprofit foster-based rescue — called Lee and advised that a volunteer, Rachael Weber, thought the dog resembled one that was reported stolen from the city of Sumter in June 2019. Weber was referring to an old flyer of a dog named Diesel.Lee compared recent pictures of the dog to the flyer and came to the same conclusion. Staff Sgt. Gerald Richardson with Sumter Police Department also thought the rescued dog was a match to Diesel after visiting Sumter Animal Control. The dog’s actual owner, Tiffaney Capell, was called to the animal shelter to identify the dog. She brought her young daughter who said she’d prayed every night that they would get their dog back. And when Capell’s daughter was told there was a possibility the dog might not be theirs, she said she had a feeling it was Diesel. When the dog was released from the kennel he ran straight to Capell, tail wagging. “The sequence of events that had to align for this dog to find its owner were astounding,” Lee said. Officers are still attempting to contact the person living at the residence where Diesel was found. Charges are forthcoming.

The post Stolen Dog Rescued And Reunited With Family One Year Later appeared first on iHeartDogs.com.