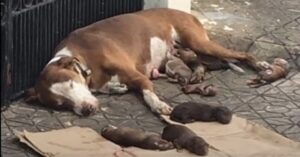 With many cases in animal rescue, timing is critical. One ticking clock scenario is when rescuers have the chance to save newborn puppies. The first few weeks of a puppy’s life are critical, and proper nutrition is essential to their well-being and growth.

When an abandoned female dog gave birth on the streets in 2020, the people who discovered her knew they had to act quickly if they were going to save the whole family. After birthing a litter of six, the mama dog was utterly exhausted. She didn’t have the strength to care for her new babies.

Sadly, two of those puppies didn’t make it. Rescuers were going to make sure the others avoided that tragic fate.

Gathering the dogs proved difficult, with the scared, worn-down mother dog showing signs of aggression towards rescuers. They figured she was abandoned a while ago, though she still wore a collar.

Abandoned dogs often develop fear aggression and anxiety, through no fault of their own. This traumatized mama snapped at rescuers as they worked to collect the pups. They sensed her fear and knew she didn’t trust strangers.

Eventually, though, they got the whole family off the street. The four puppies had a rough start to their lives, but at least they all had each other to lean on.

Once the rescue provided the mama dog with some proper nutrition and water, she regained her strength. She was then able to feed her puppies the milk they desperately needed. For the first four weeks, their mother’s milk is the only nutrition puppies receive.

With enough food to fill their bellies, the pups, previously unable to fend for themselves at all, eventually grew bigger. Not long after, they opened their eyes for the first time. Mama dog remained “skittish,” but felt much better with food of her own to eat.

If rescuers got to these dogs much later, who knows how many of the puppies would have survived. Not to mention, life on the streets is tough for any adult dog too. This mom was probably starving before she even gave birth to her litter.

Watch the video story of this family’s rescue and their transformation from Pet Adoption’s YouTube channel below:

Obviously, these puppies are all little miracles, but it’s worth noting that spaying and neutering your dogs helps control the pet population and prevent more precarious situations like this one.