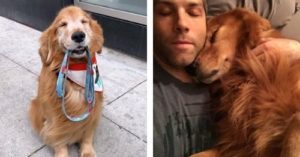 UPDATE: A few weeks ago, we brought you the story about the self-walking dog helping thousands as he walked the streets of Chicago. He touched the lives of so many. Sadly, Sporty lost his battle against cancer on November 14th. He passed in the arms of his loving dad who continuously fought to give Sporty all the love and support he could ever need.

“He went so peacefully on his blankets with his head on my lap, paw in my hand and surrounded by all his favorite toys. He knew it was his time and I know he is in a better place. He is running free across the rainbow bridge holding his leash creating a wave of smiles in his wake.” – Sporty’s dad, David Duncan.

Our hearts go out to Mr. Duncan. Until we meet again on the other side of the Rainbow Bridge. RIP Sporty.

Sporty is a Golden Retriever that provides “street therapy” on his walks through downtown Chicago. Sporty is known for his adorable habit of walking himself on his leash, and happily greeting everyone he passes. He’s the talk of his town!

As this lovable pup has entered his senior years, he has had a few run ins with serious illness. What was once small cell lymphoma that he battled last year, has now returned as large cell lymphoma in his GI tract.

In the days before his recent diagnosis, Sporty became ill at home. After experiencing vomiting and diarrhea that would not improve at home, Sporty’s dad, David Duncan, rushed him to the animal ER. At this visit they were able to diagnose him with aspiration pneumonia, as well as fluid in his abdomen. After further testing, it was found that his cancer returned in a more vigorous form.

Sporty had an intensive stay in the animal hospital, in an effort to treat his pneumonia and get him stable enough to battle this tough diagnosis going forward. After 5 days in the hospital, Sporty was finally able to go home! In just days after being home, he was already back to enjoying his daily walks.

Even though Sporty is home, his medical journey is just getting started. He is currently taking a medication designed specifically for dogs with large cell lymphoma, and will begin chemotherapy in an effort to extend his life. David Duncan will do everything it takes to keep his beloved pup comfortable, and enjoy as much time as possible with his very best friend. With this being said, the amount of treatment needed for Sporty will be incredibly expensive. The doctors estimate $20,000 in fees for his medication and chemotherapy together.

Over the years, Sporty has gained quite the following on Instagram. Over 70,000 people currently follow his journey, and enjoy the daily footage of his adorable antics. Luckily, with a dedicated fan base like his, Duncan has been able to raise an impressive amount of money toward Sporty’s medical care. After just a week of his campaign being active, they have reached their $20,000 goal!

We are so happy that Sporty will go forward to receive the care that he needs. With his incredible support system of dog lovers around the world, there’s no doubt that he will have everything he needs to fight this battle! We are sending all of our love to Sporty and his dog dad during this difficult time!

You can contribute to Sporty’s fight against cancer at GoFundMe.com.