Sorry, But This All Dog Nativity Play Is Better Than Yours 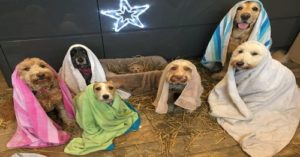 If you’re planning on putting up a Nativity play this year, you’ve got some real big shoes to fill. The best Nativity play I’ve ever seen happened in England with the cutest cast of actors: all dogs. And lucky for us all that event was captured on camera.

Wags to Riches, a family grooming service, has absolutely mastered the art of the group dog photo. This, as many of us dog people know, is no easy feat. Thank goodness for that, because they brought us the most iconic Christmas photo of the last few years.

On Twitter, Wags to Riches shared some behind the scenes pictures from a nativity play they put on with their pups and pup clients. Because it’s incredible, it obviously went viral. The tweet has over 1400 retweets and 3100 likes.

Unfortunately, Frankie the Golden Retriever has since gone to the Rainbow Bridge, according to Wags to Riches. I’m glad he got to be a star in life!

Is this a perfect picture or what? The towel and blanket based costuming is a little light, but the attention to detail is elsewhere. The hay on the floor, the shining star, and of course the little puppy Jesus in the manger.

The following year, the tradition continued with even more roles cast in the Nativity play. A star, an angel, and even a farm animal featured.

How were these roles cast, you wonder? Apparently there was an audition process. Don’t worry, they captured this too!

As to how this was pulled off so perfectly, Wags to Riches owners Toby and Jo told The Dodo it wasn’t hard.

“They were all happy to sit for the photo. It’s amazing what dogs will do for a biscuit.”

And of course the puppy remained so patient in the manger because… it’s not real. It’s a ceramic figurine. Still, as photographers these two clearly have skill. They’ve done photoshoots for other holidays too.

They even recreated the royal wedding!

Jo writes on Wags to Riches’ website how her part-time business turned into a full-time love affair.

“I started grooming and walking dogs on a part time basis, just a few hours a week, fitting dogs in around family commitments and the school runs. As demand increased for both dog walking and grooming, things rapidly became busier and busier… so my husband Toby joined me.”

The post Sorry, But This All Dog Nativity Play Is Better Than Yours appeared first on iHeartDogs.com.