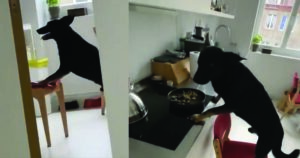 It seems our dogs always suddenly remember how to sit once a treat is involved. Or have you ever tried to keep a canine and their nose for all things delicious out the kitchen on Thanksgiving? It’s not an easy task.

And the same can be said of pretty much any time you want to cook a little something for yourself but your dog has different ideas.

To put it mildly, doggos love to eat. And they’ll do just about anything to get to a tasty treat—especially if it happens to be meant for you.

“When You Leave Your Dog Alone For A Minute…”

Today’s video, with a caption that reads “When you leave your dog alone for a minute…”, comes to us from someone named Sanders in the Netherlands who goes by the Twitter handle Buitengebieden. (@Buitengebieden_).

The pooch is unidentified, and it’s hard to tell exactly where and when the video was shot, as Buitengebieden shares a lot of animal videos on Twitter that suggest he has multiple animals or is just a big fan of good pet videos. Either way, we’re grateful.

And we’re hoping it is his dog because it is an awesome dog!

The video begins with our videographer catching a sneak glimpse of the pup through a doorway as he puts his paws up on a chair and begins to slide it across the kitchen. To what aim, we don’t yet know.

Caught In The Act

The video quickly pans to the left with the filmer moving into another room to catch the dog in the act.

We’d love to know what smelled so irresistible that the dog figured out how to slide a kitchen chair all the way across the floor, pushing with his front paws and standing on his back legs, to get to it.

And he does it so easily and quickly that it certainly suggests this isn’t his first rodeo when it comes to finding a way to retrieve food from the stove.

The 15-second video has currently been viewed more than 4.5 million times.

We wish we knew more about the dog-owner relationship, but given how smart the dog is and how fun the video is, it seems like they have a very happy household.

So kudos to you, ingenious and hungry pup! We think you’ve earned the delicious prize for pulling this off.

You can check out the full video below.

When you leave your dog alone for a minute.. pic.twitter.com/OLFvT0TF20

The post Sneaky Dog Slides Chair Across Kitchen To Steal Food From The Stove appeared first on iHeartDogs.com.