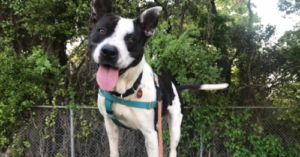 Anxiety over new and frightening situations can make dogs act in certain ways they normally wouldn’t. This so-called naughty behavior sadly works against them, especially when it comes to getting adopted from shelters.

A sweet adoptable Cattle Dog/Pit mix named Gino in Austin, Texas is an unfortunate victim of this phenomenon.

In a touching Facebook post, volunteers at Austin Animal Center where Gino has been a longterm resident expressed hope for this little guy, despite his initial anxiety and fear of engagement.

“When he first came in, we literally couldn’t get him to engage with any kind of treat. It was like he’d never been around people before even.”

Gino arrived at the shelter around 10 months ago as a stray with very little experience interacting with humans. AAC’s best guess is that he was just left outside and never brought indoors or played with. Right away, everything was exciting but overstimulating to him. He was especially cautious being inside.

Poor Gino’s stress continued to build over time at the shelter, especially when it came to re-kenneling and being left alone in his kennel in this terrifying new environment. Even being touched was over-exciting for him since the little angel had so little experience with that. Getting pets made him jumpy and mouthy.

The committed volunteers at AAC saw past Gino’s acting out and knew that living in the shelter was making him anxious and affecting his behavior.

AAC noted that Gino has a dedicated team of staff and volunteers who have supported him for the past 9 months. They’ve worked with him on everything from tricks to managing his stress in new situations. He may get a little excited after pets now, but he’s learned how to calm down.

Accompanied by volunteers, Gino’s been to parks, stores, and houses, but he’s still returned to the shelter after each trip. The post from AAC emphasized that the poor pup deserves a chance at real life. He deserves to be living in a home with family.

“He’s come such a long way here, he needs that home environment. He’s ready for that next step.”

“He deserves what every other dog deserves, and that’s love and compassion.”

What Gino needs first and foremost is a comfortable home environment to grow in, but he also really needs a patient adopter willing to accept his overexcitement and understand his background.

“In return, Gino will make you laugh endlessly with his antics, help you pick out the best mozzarella, and dance excitedly every time he sees you.”

He’s even dog-friendly (with introduction of course!)

Know any dog-lovers in the Austin area (or anyone willing to come down and pick up a new family member?) Share Gino’s gorgeous smiling face with them ASAP!

Friends, we really need your help finding Gino a home. This special guy is struggling at the shelter, and needs a way out. Gino hasn’t had it easy. This boy came to us lost and confused, and he desperately wanted people to stay with him, and not leave him alone in a kennel. His anxiety about shelter life was obvious, and he tried to get attention any way he could, sometimes with panicky, naughty behavior. Fortunately, Gino made some awesome human friends- and now he has a dedicated team who have supported him for the past 9 months. They’ve helped him learn fun tricks, and figure out how to manage his stress in new situations. They’ve taken him on outings to Home Depot, to parks, and even to their houses. They’ve given him training, support, and love, but there’s still one thing Gino still really needs: a home.Can you help us find Gino’s home? Whether it’s an adopter or a foster, Gino needs to be out of the shelter. It’s hard for us to watch him anxiously waiting for a way out of the kennel, day after day. He deserves a chance at a real life, and we can’t make that happen without you. In return, Gino will make you laugh endlessly with his antics, help you pick out the best mozzarella, and dance excitedly every time he sees you. Gino will go home with the full support of our volunteer behavior team, at orangedotcrew@gmail.com, so adopting (or fostering!) comes with lots of perks and a group of new best friends. We know Gino’s hero is out there- please help us find Gino a family.

Any inquiries about Gino can be directed to orangedotcrew@gmail.com, the dedicated group of volunteers who work tirelessly to find longterm shelter dogs forever homes (take a look at their Instagram here.)

Let’s get this good boy to live his best life, outside of a shelter!

The post Shelter Life Makes Former Stray Anxious And All He Wants Is A Way Out appeared first on iHeartDogs.com.