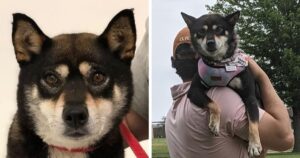 One major reason rescued dogs get returned to shelters is that their new family can’t understand their anxious or fearful behaviors. Dogs surrendered to shelters often experience anxiety after being brought into a hectic new environment, and many more have been traumatized or mistreated prior to arriving.

When Hope Ervin rescued a Shiba Inu from Paws Jackson, an animal shelter in Jacksonville, Illinois, she sensed that the dog may have emotional issues related to her time in a puppy mill. Sylvie, as she named the pup formerly called Fuji, paced and circled a lot as though she had no experience with open areas. She also exhibited separation anxiety.

Ervin brought Sylvie to work with her one day, where she made a heartbreaking and surprising discovery. Included with her new dog’s adoption paperwork was a special message for her as an adoptive parent.

“I opened up the envelope that came with her from the shelter that had her vaccination records in it. This poem was inside. Made me cry like a big baby. This really touches my heart because she was abandoned several times, and was a part of a puppy mill.”

A Poem From A Rescue Dog’s Perspective

Written in 1995 by Evelyn Colbath, the included poem is titled “Baggage.” It comes from the perspective of a newly adopted dog who has already experienced the pain of being returned to a shelter. One stanza reads:

“Let’s unpack Loneliness, Heartache and Loss,
and there by my leash hides Fear and Shame,
as I look on these things I tried so hard to leave,
I still have to unpack my baggage called Pain.”

Essentially, the message this poem puts out there is one of understanding and patience. Dogs rescued from shelters often need time to overcome their fears of abandonment or mistrust of new people. When given this opportunity, they can come out of their shells, learn to trust, and show off their true personalities.

As the poem concludes:

“Do you have the time to help me unpack?
To put away my baggage,
To never repack?
I pray that you do; I’m so tired, you see
But I come with baggage’ will you still want me?”

Since her adoption, Sylvie has begun to trust Ervin and gain some confidence. Ervin described the dog’s incredible growth:

“It’s a very emotional experience. I didn’t think it would be like this when I adopted her. But it’s been amazing to watch her grow.”

A Poem Goes Home With Every Dog

Lisa Jackson, a co-founder of Paws Jackson, told Fox News she has been including a copy of the poem with each adoption after a request from Julie Boulanger who helped start the rescue organization.

“When Paws started, she found that poem and one of her requests was that we always put one of those in every adoption envelope. And that was 10 years ago.”

Though Boulanger no longer works at Paws Jackson, the shelter continues to honor her request. She currently lives in Florida and will be undergoing brain surgery soon. Jackson emphasized:

“[The poem will] be in every envelope for as long as Paws exists.”

Rescuing a dog with “baggage” may require some extra love and patience, but the rewards are priceless. Including this heartbreaking but important poem is a reminder of that.