Seoul Has Been Declared Dog Slaughter-Free! Here’s What That Means. 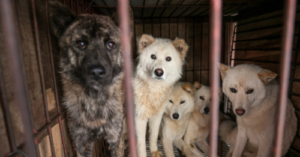 When it comes to animal advocacy, fighting the good fight can be exhausting much of the time. No one ever said activism was easy, but when a fight for justice for the voiceless culminates in a victory, every step of the way becomes worth it.

Seoul’s Mayor Park Won-soon and the Seoul Metropolitan Government have been campaigning for this for over a year.

Humane Society International/Korea has also been working with dog meat farmers to close the farms and transition to more humane livelihoods. Dog Farmers in Korea are increasingly leaving the trade as criticism ramps up and profits decrease.

It’s heart-wrenching to think that a practice like this can still be happening in 2019, but the trends are positive. A Gallup Korea survey found that dog meat consumption in the country has declined rapidly over the past several years as more Korean citizens, especially younger generations, are departing from dog meat. 70% of South Koreans surveyed said they won’t eat dog meat in the future.

In a statement, Nara Kim with HSI/Korea expressed optimism about a dog meat-free future.

“I am so happy to see Seoul’s last remaining dog meat shops end dog slaughter. Although these shops can still sell dog meat, it is nonetheless wonderful to see South Korea take one step further away from this dying industry that most Koreans want nothing to do with. It gives me hope that South Korea’s future is dog meat-free. HSI/Korea will continue working with the government, and supporting farmers who no longer want to work in the dog meat trade, so that one day we will be able to celebrate the closure of South Korea’s final dog slaughterhouse.”

Dogs who were once condemned to be slaughtered, some of which had never even felt grass under their feet, are now getting second chances. It’s all thanks to the hardworking people who refused to accept cruelty as the norm.

Keep on giving our canine friends a voice!

The post Seoul Has Been Declared Dog Slaughter-Free! Here’s What That Means. appeared first on iHeartDogs.com.